WASHINGTON (CNN) — The United States said Monday that Iran is continuing to comply with the terms of the nuclear deal that curbed Iran's nuclear program in exchange for sanctions relief.

But the Trump administration coupled its certification to Congress of Iran's compliance with a blistering critique of Iran's non-nuclear activities, saying Iran is "unquestionably in default of the spirit" of the deal. Secretary of State Rex Tillerson issued a similar critique earlier this year when the US certified the deal for the first time since President Donald Trump, a fierce critique of the deal, took office.

The US is also considering additional sanctions against Iranian entities to target the country's ballistic missile program and state sponsorship of terrorism, two items not covered by the deal, a senior administration official said.

"The secretary of state — and the President — intends to emphasize that Iran remains one of the most dangerous threats to the US and to regional security," another senior administration official said before ticking through a list of a half-dozen areas where Iran remains a destabilizing force. "Moving forward, the administration intends to employ a strategy that will address the totality of Iran's malign behavior and not just focus on the nuclear deal."

The Trump administration is also exploring ways to strengthen enforcement of the deal, formally known as the Joint Comprehensive Plan of Action, by working with allies to interpret its provisions more stringently, three senior administration officials said on a call with reporters Monday.

The officials said that, in particular, the United States' European allies "want to work with us to interpret the agreement more strictly. The deal, though, rests not just on the US and those European allies — France, the United Kingdom and Germany — but also on China and Russia.

But despite the tough rhetoric, the Trump administration offered no immediate actions to counter the charges of destabilizing behavior it leveled against Iran, straying far from the harder line Trump has long promised he would take against the country including his calls on the campaign trail for the US to tear up or renegotiate a deal he decried as "the worst deal ever." 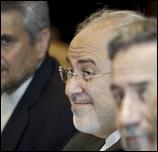 Iran says it has received 'contradictory signals' from Trump

Iran's foreign minister said the government has received "contradictory signals" from the Trump administration and doesn't know how to interpret them, but he held open the possibility of talks and improved relations with the United States.

Now, Trump is certifying the very deal that he blasted on the campaign trail for the second time of his presidency, extending the sanctions relief granted to Iran under the agreement. The US must certify to Congress every 90 days that Iran is complying with the deal, which was brokered two years ago by President Barack Obama's administration.

Iranian Foreign Minister Mohammad Javad Zarif said earlier on Monday that Iran has received "contradictory signals" from the Trump administration and confirmed he has had no contact with his American counterpart, Rex Tillerson.

Zarif said that Iran's compliance with the nuclear deal is "straightforward" and "black and white," and questioned whether US authorities were deliberately dragging their feet in an effort to keep companies out of the Iranian market, referring to the United States' compliance with the sanctions relief portion of the deal.

Zarif argued the United States' failure to build on the foundation of trust created by the Iran nuclear deal suggests "US hostility to Iran will not end."

While he has never spoken with Tillerson, Zarif said lower-level talks on the implementation of the Iran deal continue.