12PM: State expected to wrap up its case against John Swallow today

SALT LAKE CITY — A defense attorney for John Swallow on Wednesday tore into the FBI agent who led the investigation that put the former Utah attorney general on trial for alleged public corruption.

Williams has spent much of the trial trying to tarnish Jenson's assertion that Swallow, former Utah Attorney General Mark Shurtleff and the late Tim Lawson extorted him down for money and favors. He also questioned Isakson about failing to corroborate information that Jenson provided investigators from prison.

Williams asked Isakson if he could point to an interview where Jenson said he was extorted or threatened with prison if he didn't pay court-ordered restitution on his 2005 criminal case for selling unregistered securities.

"He definitely talked about his relationship as one where he felt like he had to do certain things," Isakson said of Jenson.

Williams pointed out that Jenson didn't approach investigators about Shurtleff, Swallow and Lawson until learning in prison that they were the subject of unflattering news reports in early 2013. Isakson didn't dispute that.

Reading from FBI interview transcripts, Williams posed specific questions to Isakson. The agent often answered that he didn't recall details but that the reports sounded right.

Isakson is scheduled to finish his testimony Thursday before the state rests its case a day later than anticipated and the defense starts calling its witnesses. The trial is scheduled to run until March 3.

Swallow is charged with 12 felony charges and one misdemeanor, including racketeering, bribery, accepting gifts and making false statements. The state dropped charges against Shurtleff last year. Lawson also faced criminal charges but died before the case was resolved.

In his testimony for the state, Isakson touched on Swallow’s spring and summer 2009 trips to the posh Pelican Hill resort in Southern California on Jenson's dime, his use of businessman Jeremy Johnson’s million-dollar Lake Powell houseboat and his 2012 run for attorney general. Swallow was a private lawyer and lead fundraiser before becoming Shurtleff’s chief civil deputy in December 2009.

Prosecutors also showed portions of a 2013 deposition Swallow gave to the Utah House investigative committee. In the video, Swallow says his decision to run for attorney general was a gradual one made with his wife. Swallow, who served three terms in the Utah Legislature, said he had political aspirations when he joined the attorney general’s office in 2009. 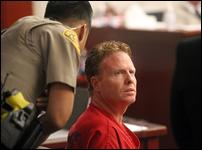 Swallow witness describes 'cruel' tactics in raid of her home

A witness for the state broke down in tears Friday recounting how agents raided her small apartment despite her cooperation in the investigation of former Utah Attorney General John Swallow.

Attorneys spent much of Wednesday wrangling over evidence, particularly a letter the Department of Justice Public Integrity Section issued declining to file federal charges against Swallow and Shurtleff in September 2013.

The state was just beginning to question Isakson when he told jurors the FBI had asked the Department of Justice not to file charges against Lawson, a close friend of Shurtleff who considered himself the attorney general's "fixer."

A statute of limitations was approaching regarding the allegations against Lawson for his involvement in the alleged fraud, Isakson said, but the FBI asked for the department to hold off so that its investigation into Shurtleff and Swallow could continue.

Once jurors were excused for lunch, Williams raised concerns that the defense had been barred from discussing the justice department's decision to not charge Shurtleff and Swallow and therefore they had never received evidence about that to prepare the issue for the trial.

Davis County Attorney Troy Rawlings was after the same evidence in his prosecution of Shurtleff, but has said federal agencies wouldn't hand it over. It was among the reasons he eventually dropped the case against Shurtleff.

Now, with the issue raised by the state's witness, defense attorneys said they were entitled to that evidence about the Department of Justice's decision, and Isakson was put back on the stand for questioning outside the presence of the jury.

Isakson said there was a "slew" of criminal activity and allegations the FBI was interested in and some of it was more suited to prosecuting in state court.

He said he didn’t recall that the Department of Justice decision was off limits for the Swallow trial and just answered the questions prosecutors asked him. As Williams grilled him more, Isakson agreed that he did know and forgot, but “will never forget again.”

Testimony the past two days also came from Tim and Jennifer Bell, who hosted a fundraiser in their backyard for Swallow in August 2012.

Tim Bell, who owns a medical device company, said the then-attorney general candidate's demeanor changed when he realized his host was part of lawsuit in which the state had intervened.

Tim Bell testified that, standing around a fire pit together, Swallow became surprised when it hit him that he and his wife were the same Bells who had sued Bank of America over its foreclosure practices in 2011.

The Utah Attorney General's Office was involved in that case, having intervened to prevent the bank from conducting nonjudicial foreclosures in Utah, representing thousands of Utahns whose property faced foreclosure.

On cross-examination, defense attorney Cara Tangaro asked Bell whether there was any truth to the picture prosecutors were painting, suggesting the costly backyard fundraiser was actually an effort to bribe Swallow for support in their case.

Tim Bell said the event in his backyard cost $28,000 but that he reported on campaign finance disclosures that it was a $15,000 in-kind donation and wrote off the rest as a business expense. The Swallow campaign then directed him to report it as a $1,000 in-kind donation and later the full amount, he said. Bell called it a "painful memory" as he described what happened.

Bell testified that he also made a cash contribution to the Swallow campaign, but the campaign returned the money, saying it was inappropriate because of the litigation.

Former campaign workers testified that Swallow was very sensitive to the "optics" of his campaign and how the public might view him.

The Bells ultimately settled with Bank of America and obtained a loan modification, allowing them to stay in their home.

Tim Bell testified Wednesday that the fundraiser occurred after he saw the lawsuit with Bank of America was won, but before settlement terms were finalized. However, he said, there was no involvement from the attorney general's office in the settlement.

Farr said Swallow told him that he might have given the bank the impression that if the Bells' case were settled, the state would drop out of the lawsuit.

Shurtleff pulled the state out of the lawsuit during his last days in office, after Swallow was elected attorney general. In an email to an assistant attorney general who had worked on the case, Shurtleff wrote that staying in the litigation was "becoming a very complicated issue" for Swallow because of the Bell fundraiser.

Jennifer Bell also took the stand Wednesday. Like her husband, she was questioned about the couple's involvement with Jenson in his failed multi-billion dollar Mount Holly resort development.

On the stand, Jennifer Bell called Jenson manipulative and a man with no conscience who exploited trusting members of The Church of Jesus Christ of Latter-day Saints.

"He's a sociopath, he has no conscience," she said.

Hurting from financial losses in the Mount Holly deal, Jennifer Bell petitioned a meeting with Shurtleff and other investors. Questioned by prosecutors, she insisted Swallow was not at that meeting.