SALT LAKE CITY —The federal rejection of a portion of the state's plan to control regional haze at national parks is prompting Utah to file a legal challenge in hopes the courts will deem the local plan sufficient.

The Utah Department of Environmental Quality filed an appeal of the U.S. Environmental Protection Agency's July 5 decision, which rejected just one of component of the state's plan to improve visibility by forcing reductions in carbon emissions.

"We believe that our plan is supported by the applicable regulations and is based on sound science and common sense to improve visibility at our national parks at a reasonable cost to Utah ratepayers" said Bryce Bird, the state's director of the Division of Air Quality.

EPA wants to impose its federal plan to cut emissions from the Hunter and Huntington power plants in eastern Utah, a plan that will require the plants owned by Rocky Mountain Power to incorporate $700 million worth of technology upgrades.

Bird said more than a decade's worth of air quality studies in the region show the atmospheric chemistry at play keeps background ammonia at a level that further reductions in nitrogen oxide will be minimal with the new technology, delivering "imperceptible" benefits.

Since 2002, state and industry efforts to reduce sulfur dioxide emissions from power plants have resulted in a nearly 28,000-ton reduction and nitrogen oxide pollutants are down 15,258 tons a year.

Bird added that the EPA's requirements in the regional haze plan clearly allowed other avenues to achieve pollution reductions, including the shuttering of the Carbon Power Plant at Helper and the installation of controls not required at a unit at the Hunter plant to reduce multiple emissions. 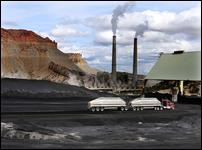 The U.S. Environmental Protection Agency only partially accepted Utah's regional plan and will impose its own measures to reduce haze in national parks and wilderness areas.

Brian Moench, with Utah Physicians for a Healthy Environment, said the state is wrong to challenge the EPA's decision.

"The major thrust of the applicable federal rule may be controlling regional haze affecting the visibility and aesthetic enjoyment of our world renown national parks, but an equally important co-benefit of reducing coal emissions is the protection of public health," he said. "These coal power plants emit about 40 percent of the state's nitrogen oxides."

The state filed a petition for review on Friday with the U.S. 10th Circuit Court of Appeals and also asked the EPA to stay implementation of the federal plan.

"We are committed to clean air and believe we can improve visibility with common sense solutions that don't unduly burden ratepayers," Bird said.

In testimony this year before a congressional subcommittee, a critic of the regional haze rule said the EPA by March had rejected 15 state plans to combat visibility challenges at national parks or wilderness airsheds, at a combined cost of $5 billion to ratepayers.

The regional haze rule is a result of a 1999 initiative announced by the EPA to improve visibility impairment. It is not a public health standard.