Four months after making an ill-advised decision, the University of Utah changed course and announced it will resume playing BYU in men’s basketball. The reversal means the long-running series will face only a one-year interruption and resume in Provo early in the 2017-18 season.

For all involved, thank goodness the Utes chose the right. There simply weren’t enough legitimate reasons for the two teams not to play one virtually meaningless non-conference game.

In January, one month after BYU freshman guard Nick Emery made a bonehead decision to sucker punch Utah’s Brandon Taylor, Utah coach Larry Krystkowiak personally paid $80,000 to buy out the game set for the Marriott Center next season.

Krystkowiak and athletic director Chris Hill held a press conference to announce the series had become too toxic and needed a break. Krystkowiak took it upon himself to determine BYU didn’t show enough remorse after the Emery punch, apparently believing the incident deserved more than a public apology and the mandated one-game suspension.

BYU athletic officials were furious at Krystkowiak, believing the rough play went both ways (one BYU employee sent me a photograph of Taylor kicking former BYU guard Tyler Haws in the midsection). The BYU coaches thought Krystkowiak never intended for his team to go back to Provo after last season’s game in the Huntsman Center.

Good thing all the finger pointing no longer matters.

For Utah’s sake, all the grief Krystkowiak and Hill caught for not playing the game wasn’t worth it. Soon after they went public about not playing, the state legislature decided it was going to conduct an audit of the Utah athletic department. The timing indicated a possible ax to grind against the university, which isn’t something the administration wanted. 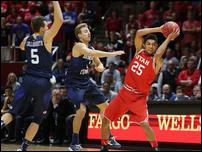 The decision to play again in Provo also satisfies the majority of both fan bases, leaving only a vocal Utah minority to whine about it. Attendance figures of all non-conference games between the two teams since both left the Mountain West Conference five years ago, indicate the rivalry still resonates with each fan base.

Considering what’s at stake, there really is no downside to the series. One non-conference game, no matter the result, doesn’t do much on its own to determine if either team makes the NCAA tournament in any given season. Now that both teams play in different conferences, it is doubtful recruits would make a college decision based on one game, even if it is lopsided in either direction.

The best thing to come out of skipping the game for one season is it puts both teams and their respective fan bases on notice. Neither fan nor player on either side can act inappropriately without facing intense public criticism.

In a way, Krystkowiak’s decision was a shrewd move. As long as he remains Utah’s coach, and probably even beyond his tenure, BYU must stay in line in every future game to avoid proving Krystkowiak right.

Even if they weren’t enough to warrant canceling the series, Krystkowiak’s assertions about BYU’s dirty play has merit. Particularly against Utah, the Cougars have walked a fine line between being aggressive and dirty.

It is one basketball game, nothing more and nothing less. Players, coaches and fans should go back to the basics by keeping it clean and fun.