SALT LAKE CITY (AP) — Proponents of a legislative proposal that would allow Utah residents with chronic pain or debilitating conditions to consume edible marijuana products such as brownies and candies have found a face for their cause.

An LDS mother who suffers from a rare genetic disorder that causes devastating spasms and frequent joint dislocations that force her to use a wheelchair said this week she is stepping forward to become a voice for others suffering in silence.

Enedina Stanger and her family recently moved to Colorado, where marijuana is legal. But she was back in Utah this week to deal with charges stemming from her October arrest for using marijuana in her car in a public parking lot in Ogden. She said cannabis is the only medicine that gives her reprieve from her "pain prison."

People in Utah fear judgment that comes when others find out they are using marijuana, Stanger said. An estimated two-thirds of residents in Utah identify as being members of The Church of Jesus Christ of Latter-day Saints, which instructs its faithful to abstain from alcohol and drugs.

"This isn't a sin. This isn't a moral thing," said Stanger, a mother of two young daughters. "God put it on this earth. If you believe in God, you believe he created everything for a purpose, and the purpose for this little plant is medicine."

Stanger is advocating for a plan from Sen. Mark Madsen, R-Eagle Mountain, that is one of two dueling medical marijuana proposals to be considered in the Utah legislative session that begins on Jan. 25. Madsen's plan bans smoking pot.

A more restrictive alternative from two other GOP lawmakers would expand a limited program Utah passed last year, which allows those with severe epilepsy to use cannabis extract oil obtained from other states.

The proposal from Rep. Brad Daw, R-Orem, and Sen. Evan Vickers, R-Cedar City, would allow the oil to be made in Utah but would still take a careful approach. That plan received an early vote of support in November from some state lawmakers.

I gotta get used to checking my phone and seeing my mugshot. So weird. The best thing is to follow it up by all the love...

Connor Boyack, president of a libertarian-leaning think tank called the Libertas Institute that backs Madsen's plan, said Stanger is a perfect example of why people need access to marijuana for medical use.

"She s a young, caring mother. Faithful Mormon. Her father is a retired FBI agent, and she has great respect for the law," Boyack said. "And yet cannabis is literally the only thing that helps her."

Daw said he has great sympathy for Stanger, but said legislators shouldn't pass a sweeping state law based on the unfortunate condition of one person. He said science still hasn't proven that marijuana is the best answer for pain.

He points to the fact that the Utah Medical Association and Utah Academy of Family Physicians have both said they oppose Madsen's bill. The groups say there's not enough evidence to show that marijuana can safely be used as a treatment. 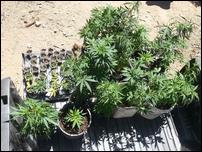 There are some things Enedina Stanger can do with her joints most of us can't. Or would ever want to.

Stanger said she was diagnosed with the rare genetic disease called Ehlers-Danlos syndrome about 2 ½ years ago, and she started using marijuana about one year ago after nothing the doctors gave her worked.

She recently pleaded guilty to a misdemeanor drug-possession charge. She doesn't have to serve time, but she is on probation for two years and must complete a parenting class because police say her daughter was present when she smoked marijuana on Oct. 1. She disputes that allegation.

Stanger and her husband are praying Madsen's law passes and they can move from Fruita, Colorado — where they are living in an apartment and have no jobs — and back to Utah where they have all their family and support system. Their two daughters have also been diagnosed with the genetic disease.

"We have to give people hope. Medical pills aren't giving people hope," she said. "There's nothing to be ashamed for having to use a plant for medicine."