SALT LAKE CITY — For about 40 hours, a tornado-like mass of plasma swirled above the surface of the sun.

The solar event, which started Sept. 1 and lasted through Sept. 3, was captured by NASA's Solar Dynamics Observatory. Researchers said the mass of plasma was relatively small, but its movement is still captivating.

"It was stretched and pulled back and forth by powerful magnetic forces but not ripped apart in this sequence," NASA's description of the event reads.

The ionized particles that made up the "tornado" reached temperatures of about 5 million degrees, according to NASA.

These types of solar events are not unheard of; back in 2011 NASA detected a solar "tornado" that was five times the size of the Earth. 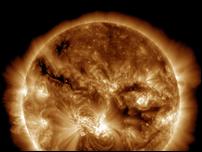 The power and beauty of the sun is on display in two captivating videos released by NASA.
×