What are the fittest cities in the US and why?

WASHINGTON (CNN) — Regardless of where you live in the United States, one trend seems to be clear: The more pedestrian-friendly the city, the healthier its residents, according to a recent report released by the American College of Sports Medicine.

For the eighth year running, the American Fitness Index report has provided a snapshot of health and fitness across 50 cities, and the nation's capital has topped the list a second year in a row as the "Nation's Fittest City." Minneapolis-St. Paul and San Diego were strong contenders, rounding out the top three spots. Indianapolis, known for its car racing, finished last in the heat, as the nation's least fit city, with Memphis and Oklahoma City close behind.

Leading experts in the field of sports medicine and exercise science say personal and environmental factors contribute to the rankings.

"The American Fitness Index is two things: a measure of how healthy a metro area is today, and a call to action for urban and suburban leaders to design infrastructures that promote active lifestyles and lead to positive health outcomes," said Walter R. Thompson, chairman of the American Fitness Index Advisory Board and professor of kinesiology and heath at Georgia State University. "Our goal is to provide communities and residents with resources that help them assess, respond and achieve a better, healthier life."

Cities continuously use the data provided by the American Fitness Index report to make changes in their policies and urban planning. St. Louis had one of the biggest gains this year, jumping from No. 41 on the list in 2014 to No. 30, and much of its success has been attributed to an increase in residential recreational facilities, city parks and farmers' markets, study experts say. Oklahoma City, which ranked last in 2012, improved this year after the mayor launched a "This City is Going on a Diet" campaign, in which residents reached a goal of losing a collective 1 million pounds last month.

Where does Salt Lake City rank?
Overall rank: No. 12

Areas of excellence, compared to the national average:

Access to public parks was a new measure factored into this year's rankings. Experts involved in the study say the infrastructure of a city and variety of outdoor activity options have a direct correlation to the overall health of a city.

"How walkable is your city?" asked Thompson. "In Washington, D.C., 95 percent of the population live within a 10-minute walk to a park," he said. In Indianapolis it's only 31 percent. "Clearly the environmental indicators in D.C. would lend themselves more towards supporting people who want to be physically active and healthy," he added.

"When it comes to fitness, there's not a one-size-fits-all system," said Brenda Rahe, a certified personal trainer, wellness coach and professional bodybuilder. "If you live in a city which makes it hard to walk or get to a gym, you can still get active, you just have to look for creative ways. There are tons of exercises, online training programs and coaches that you tap into from home."

Also evident from the analysis, experts say, is that people across the country are eating less fruit. The cities that ranked the lowest in fruit and vegetable consumption also had the lowest number of farmers' markets per capita.

Experts say this study is a step toward improving the health of the United States. "It's the choices and little changes we can make in our lives each and every day that can have the biggest impact," Thompson said. 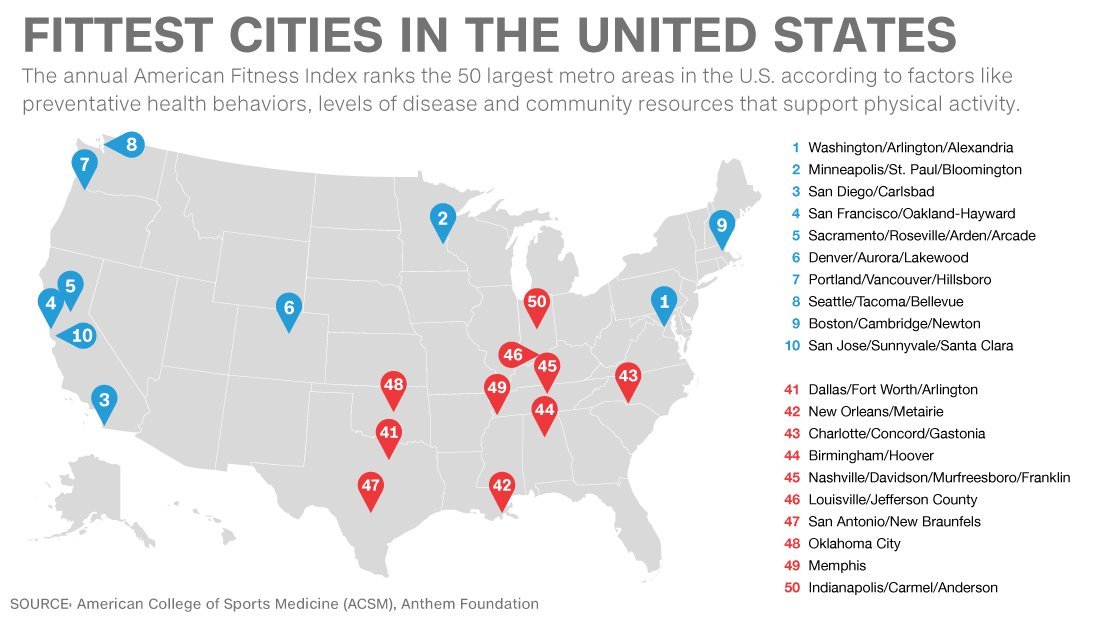