SALT LAKE CITY — Now that the courts have spoken on same-sex marriage in Utah, state lawmakers are poised to tackle controversial proposals on religious freedom and nondiscrimination.

And [statements from The Church of Jesus Christ of Latter-day Saints on Tuesday](<<a href=>) could dramatically change how the Legislature deals with those hot-button issues this session.

Members of the church's Quorum of the Twelve Apostles and a member of the Young Women General Presidency called on government leaders to preserve religious freedom while also protecting LGBT people from discrimination in housing, employment and public accommodations such as restaurants, hotels and transportation.

Church leaders also emphasized that people should not be forced to perform services that go against their religious beliefs if others are readily available to provide them.

The church's statement comes two days into the 2015 legislative session, in which lawmakers are expected to debate religious freedom and anti-discrimination measures.

"What I heard, I think what you heard, was an unequivocal endorsement of nondiscrimination in employment and housing for LGBT individuals," said Sen. Steve Urquhart, R-St. George, who is sponsoring SB100, a statewide anti-discrimination law.

"We also heard a full-throated pitch for protection of religious liberties, and that also is something I wholly support."

Rep. Jake Anderegg, R-Lehi, is proposing a law, HB66, and a resolution, HJR5, for an amendment to the Utah Constitution that would exempt not only clergy but also state and local government officials and judges from having to solemnize marriages that go against their religious beliefs.

Although he made the bills public, he said he's not comfortable with some possible unintended consequences and is working on revisions.

"My bill is going to stay narrow in scope," Anderegg said.

Meantime, other legislators are keeping under wraps proposals dealing with "religious conscience" issues in business, employment and property rights. Such legislation would seek to protect from prosecution or lawsuits people like photographers or bakers who refuse to provide services for gay weddings because of their religious beliefs.

Lawmakers also might unveil a state version of the federal Religious Freedom Restoration Act. The 1993 act requires federal laws to accommodate individuals' religious beliefs unless there is a compelling interest at stake that can't be attained through other means. 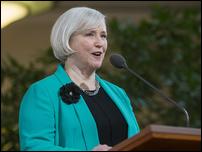 Republicans, who have supermajorities in the House and Senate, are already talking about blending legislation on nondiscrimination and religious freedom. But there is also the possibility that they won't do anything this year.

Senate Majority Leader Ralph Okerlund, R-Monroe, said the church's statements bring the discussion to the forefront. He said some legislators have been waiting to see the church's position.

"I think this probably clarifies the issue a little bit to the point where it will start to bring some people together to look at melding the two issues so that we come up with something that works for everybody," he said.

House Majority Leader Jim Dunnigan, R-Taylorsville, said if a nondiscrimination bill advances, it needs to go in tandem and likely in the same legislation as religious liberty.

"Our caucus has not discussed it, so this is brand-new," he said, "But I think if something does happen, it will have to be hand in hand."

But Sen. Jim Dabakis, D-Salt Lake City, who called the church's statement a "terrific moment for Utah history," said the issues are not tied together.

"I see Sen. Urquhart's bill as going its way and whatever happens on the other issue," said Dabakis, Utah's only openly gay legislator. "But if we do begin to extend to people, not religions, but people, the right to say, 'No, my individual religion prohibits me from doing this public service,' where does that end?"

I think (the press conference) definitely brings the discussion to the forefront. I think there are people who have been waiting to see what the church's position is, and that's important to legislators. I think this probably clarifies the issue a little bit to the point where it will start to bring some people together to look at melding the two issues so that we come up with something that works for everybody.

Anderegg said he would not amend his bill to include nondiscrimination.

Gov. Gary Herbert also weighed in on the side of running the issues together.

"I firmly believe that, in order to protect the personally held values of people on all sides, any advancement of nondiscrimination legislation should be coupled with legislation to safeguard protections to religious freedom," he said in a statement.

Lawmakers seem split on whether to go forward with any legislation at all because the U.S. Supreme Court decided this month to weigh in on whether the Constitution requires states to issue marriage licenses to gay and lesbian couples.

Senate President Wayne Niederhauser, R-Sandy, said Monday that he would like to see the bills have committee hearings. But veteran Sen. Lyle Hillyard, R-Logan, said it's premature until the Supreme Court rules on same-sex marriage.

Dunnigan said not doing anything is still a possibility "because whether or not you can marry — no pun intended — the two parts of it, remains to be seen. And whether or not we can get it right or to that comfort level where people are OK with it by the end of the session is a question."

House Speaker Greg Hughes, R-Draper, said the church's announcement will drive debate and discussion. "But if you're looking for what the endgame is or where that's all going on day two, I would not be able to tell you."

Anderegg said last week that he thought there would be pressure from GOP leaders to hold off. But Tuesday he said the church's statements provide an argument for going forward.

"It removes any sort of question of whether the church would stand in the way or be supportive or simply be silent," he said. "I think it's fairly clear that they're saying you've got to provide protections for all and yet assert your religious liberty. But make sure you do it in a very respectful way, in a civil manner that is inclusive and not exclusive of people and doesn't deny people their rights."

Organizations such as the conservative Sutherland Institute and Equality Utah, an LGBT rights advocacy group, sharply disagree over the Legislature's need to address religious freedom and nondiscrimination.

"Part of the question about the nature of the need for those is how laws will be interpreted now that same-sex marriage is part of the mix," said Bill Duncan, who heads the Marriage Law Foundation.

Duncan brought up the case of the Atlanta fire chief who was ultimately fired after expressing his thoughts about homosexuality in a self-published religious book.

He said he could imagine a scenario in Utah where people might be accused of discrimination for posting online that they agree with their church's belief in traditional marriage.

Legislators, community leaders and advocacy groups responded to a press conference held by The Church of Jesus Christ of Latter-day Saints Tuesday morning in which high-ranking leaders reemphasized the need for religious liberty and nondiscrimination.

A state religious freedom restoration law would give judges a framework for how to deal with potential claims of discrimination, Duncan said.

"When these religious liberty bills start getting floated, it threatens to unravel the protections for everybody," he said in an interview last week.

What if, Williams asked, a born-again Christian believes Mormons belong to a cult and refuses to serve them because it goes against their deeply held religious beliefs?

"That's when it gets really murky and dangerous," he said.

Williams, though, favors a statewide nondiscrimination law because it would fully integrate the LGBT community into the fabric of society. He lauded the LDS Church's Tuesday statement on nondiscrimination.

"The church joins a growing number of faith, civic and corporate leaders who also stand on the side of compassion and fairness," he said in a statement. "We believe that gay and transgender Utahns can live and work beside people of faith."

The Sutherland Institute has lobbied against a statewide nondiscrimination the past several years. It reiterated its position Tuesday that "Utah can address valid concerns of mistreatment in employment and housing and public services without contributing to an environment of intolerance toward people of faith and moral conscience."

Sutherland has long called for protection of religious freedom for individuals and organizations, and said that principle must be reflected in any proposed legislation.

"The concern we have about anti-discrimination laws such as Sen. Urquhart's proposal is that they create an environment of intolerance towards people of faith," Derek Monson, Sutherland Institute public policy director, said in an interview last week.

To a lot of my brothers and sisters, it feels like persecution when in fact it's really people claiming their rights and something that we as followers of Christ should really herald and be behind.

Those laws are generally designed to marginalize and stigmatize and even prosecute people who have legitimate moral qualms about homosexual behavior and what it means for society, he said.

Gayle Ruzicka, president of the Utah Eagle Forum, doesn't support the nondiscrimination bill, but said she believes lawmakers can write a carefully worded law that protects everyone.

The Rev. Curtis Price, pastor of the First Baptist Church of Salt Lake City, said it's more perception than reality that religious liberty is under attack. What's happening, he said, is people are asserting personal freedoms that have often been at odds with religious groups, particularly Christianity, that have enjoyed a cultural majority.

"To a lot of my brothers and sisters, it feels like persecution when in fact it's really people claiming their rights and something that we as followers of Christ should really herald and be behind," he said.

Like Williams, the Rev. Price doesn't see the need for religious freedom legislation.

Anderegg, though, said the Legislature needs to have the discussion. He noted that two-thirds of Utahns supported the state's Amendment 3 that defined marriage as the union of one man and one woman.

"In my mind, it's to bring a certain level of peace, if you will, to the minds of people who are very concerned about this issue," he said.

Anderegg also said he believes it's necessary to draw a line in the sand to protect the First Amendment. He said he sees a time when judges use the 14th Amendment to quash speech and religious rights as they did states' rights in the same-sex marriage case.