WEST JORDAN – City officials on Monday said they’re looking at ways to improve pedestrian safety on a two-lane road where a father and son were hit and killed by a car Saturday night.

Todd Johnson, 44, who was in a motorized wheelchair, and his son Levi, 11, died at the scene.

Police said the driver of the car that hit them was taken to the hospital and is cooperating with the investigation.

Relatives said Johnson and his son were heading home from a nearby Smith’s store where they had gone to buy Christmas presents. It was dark and there are no sidewalks at 7800 South and 6300 West, where the accident happened.

“Because of the rain, wet road and the darkness, our officers could not tell where they (the father and son) were when the collision occurred,” said West Jordan Police Sgt. Dan Roberts.

“Nor could the driver or witnesses say if (the victims) were on the road or shoulder.”

Roberts said the investigation will take some time and it could be four to six weeks before they get toxicology results on the driver.

That section of road has a shoulder and portions of it are gravel.

“You don’t typically have people trying to use it for a pedestrian route because of the distance where homes and businesses may be,” said West Jordan’s interim city manager, Bryce Haderlie. “A rural road is only required to have the travel on the edge of the road, so it’s currently designed to the standards it’s intended to meet.” 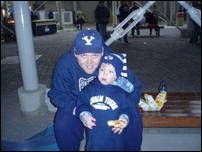 A man in a wheelchair and a boy who were both killed in an auto-pedestrian accident Saturday night were identified Sunday as a West Jordan father and son.

The area has a mix of farmland and new development, including a Smith’s store that just opened Dec. 3.

“Because the store just opened in the last two weeks, it has created a use of this road we haven’t seen in the past,” Haderlie said.

Because of the accident, the city is looking at ways to improve safety and is evaluating possible options to put in place.

“We have traffic standards that we have to follow so we’ll use our engineering department to evaluate what can be done on this type of road, whether it be asphalt, concrete, or things of that nature,” Haderlie said.

But, he said, it’s a balancing act, too.

The city has a sidewalk improvement list and officials said they will look at the demand for pedestrian use along 7800 South compared to other areas on that list.

We may choose, for the time being, to put up signs and things and ask people not to use it for a pedestrian route, to make them aware of the hazards that exist.

“We’ll have to use those evaluation criteria and make sure we don’t create something that could be considered safe and still be a hazard.”

Haderlie said the city may decide on a more immediate option while a final decision is being made.

“We may choose, for the time being, to put up signs and things and ask people not to use it for a pedestrian route, to make them aware of the hazards that exist,” Haderlie said.

Monday afternoon, Rhonda Johnson and her family gathered at the scene of the accident that took the lives of her husband and son. On Sunday, she told KSL, any changes come too late.

“If West Jordan is going to put up these developments, they need to make sure the roads are suitable,” Rhonda Johnson said. “And it really sucks that it took my husband’s life and my son’s life to have it brought to the news.”