630AM: Independent autopsy released for man shot by police

6AM: Independent autopsy results released for man shot by police

SARATOGA SPRINGS — Susan Hunt doesn't understand her son's death now any better than she did on the day he was shot and killed in a confrontation with two Saratoga Springs police officers more than two months ago.

If anything, she's more baffled.

"I don't understand how (with) something of this magnitude, they haven't done anything to contact me," she said. "That makes no sense to me. If in any way they think they can justify this, why haven't they?"

Family members of Darrien Hunt released on Friday the results of an independent autopsy, which they say is evidence that Hunt was wrongly killed by police. The autopsy shows Hunt was shot in the back of his body at least five times.

But the deciding question remains unanswered: Did Hunt pose a threat to officers and bystanders?

Hunt, 22, was walking in the area of Crossroads Boulevard and Redwood Road on Sept. 10 while carrying a samurai sword. Officers responded to a 911 call describing Hunt and his location. Police later spoke with witnesses, whose accounts varied as to whether Hunt seemed calm or was acting suspiciously.

Saratoga Springs Police Cpl. Matt Schauerhamer and officer Nicholas Judson confronted Hunt in the parking lot of a credit union. At some point, a shot was fired and Hunt ran. About 200 yards later, Hunt was shot and killed in front of a Panda Express, according to the Hunt family's attorney, Robert Sykes.

An investigation of the shooting by the Utah County Attorney's Office is ongoing, and a report by the state medical examiner is not yet complete. But police have said Hunt lunged at officers with the sword at some point during the encounter.

An independent autopsy was done at the request of the family. The report states Hunt was shot in the lower back, the right shoulder and the left arm, each bullet going from "back to front." He was also shot twice in the "posterior" side of his left thigh and once in his right wrist, according to the report. 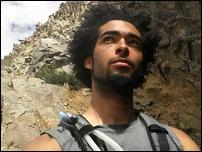 After three days of silence about what prompted officers to shoot and kill a Saratoga Springs man Wednesday morning, investigators issued a brief statement Saturday afternoon addressing the question. But an attorney for the man's family questioned that scenario.

Sykes said the autopsy shows Hunt was shot from behind, indicating he was attempting to flee and thus posed no threat to the officers. The attorney also argues Hunt was not acting in a way that suggested he was dangerous to others. A family attorney gave the same report last month.

"This is inexcusable. This is excessive force. You don't use deadly force on someone who's fleeing and not a threat to others," Sykes said. "If he was carrying an Uzi or something like that, that might be different. But he wasn't."

Sykes cited Tennessee v. Garner, a 1985 U.S. Supreme Court case that set a precedent in the appropriate use of deadly force.

"The use of deadly force to prevent the escape of all felony suspects, whatever the circumstances, is constitutionally unreasonable," the case states. "It is not better that all felony suspects die than that they escape. Where the suspect poses no immediate threat to the officer and no threat to others, the harm resulting from failing to apprehend him does not justify the use of deadly force to do so."

Hunt's family says he knew the sword was not real and wouldn't try to harm anyone.

"My son was never aggressive," Susan Hunt said. "My son knows it's a butter knife. He's not going to pull it out and try to hurt somebody with something he knows he can't really hurt them with."

The Utah County Attorney's Office did not respond to repeated requests for comment Friday.

Hunt believes the shooting of her black son was motivated by race and still plans to pursue an investigation by the U.S. Department of Justice, which hasn't responded to requests from the family's attorney. The family also plans to file a wrongful death civil lawsuit against the department, according to Sykes.

Susan Hunt said a rally will be held outside the Saratoga Springs Police Department at 12 p.m. Saturday to peacefully protest what she and her family believe was the wrongful use of deadly force against her son.