WEST VALLEY CITY — When Bryson Rowley used his truck to prevent a teen in a stolen car from driving through a park full of children a third time, he wasn't worried about the damage that would be done to his vehicle.

The truck held up considerably well after the 14-year-old crashed into it, stopping the police chase on May 31, but the front suspension and bumper were damaged. Bryan Ellison, co-owner of the auto body shop West Valley Carstar, said he saw Rowley's story on the news and decided he wanted to help.

"I knew the insurance, because it was intentionally done, wouldn't pay for (the repairs)," Ellison said. "Just knowing that he could have saved multiple kids' lives — the least I could do was get the truck fixed at no cost."

Ellison spoke with Rowley on the phone, had a rental car dropped off at his house and took the diesel 2008 Dodge Ram 2500 back to the auto body shop. Members of the community rallied together to donate bumpers, suspension pieces and other parts.

He said a normal estimate of the cost to repair the front suspension would run about $7,500, but that they did about $15,000 of work that went beyond fixing the damage sustained during the collision. 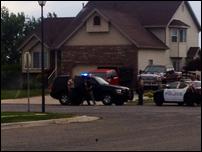 Bryson Rowley could hear the police chase in a nearby neighborhood was circling around and headed back toward the park where he and his family were spending Saturday afternoon.

"We kind of went above and beyond, all of us, to make his truck bigger and badder than it was," he said.

Rowley picked up his truck Tuesday. He said he has been overwhelmed by the gesture and that the truck drives like new.

"It was more than expected," he said. "They went above and beyond the repairs that were needed. I'm just grateful that people stepped up like that — it sure helped out."

Ellison, who has children of his own, said he was just paying it forward.

"I was just honored to do it — to take care of him for doing the right things for the right reasons," he said.