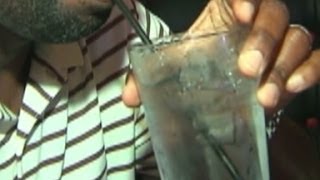 ATLANTA (CNN) — Most people choose artificially-sweetened soda over regular soda to avoid packing on extra pounds. But what if you already choose diet? Would it be helpful to quit that too?

Dr. Jim Hill says he gets this question all the time from patients in his weight loss program at the University of Colorado's Anschutz Health and Wellness Center.

With funding from the American Beverage Association, Hill helped design a study that divided approximately 300 adults into two groups: One group would continue drinking diet, and the other group — referred to in the study as the "water group" — would go cold turkey. The study was published in the journal Obesity.

Both participant groups received intensive coaching on successful techniques for weight loss, including regular feedback on the meals they logged in journals.

"The results, to us, were not at all surprising," says Hill.

While the typical participant banned from drinking diet sodas lost 9 pounds over 12 weeks, those allowed to continue drinking diet soda lost, on average, 13 pounds in the same time period. That's a 4-pound difference.

Hill says that in his clinical experience, many people who have successfully lost significant weight "are heavy users of noncaloric sweeteners."

What the prospective studies actually suggest is that if you go out 7 years, 10 years, 15 years, 20 years, the cohorts of individuals who are consuming diet sodas have much worse health outcomes.

But why was the diet soda group more successful? The most likely reason is that this group had the easier task.

Cutting calories and boosting exercise takes a lot of willpower. Trying to simultaneously give up something else you regularly enjoy — such as diet soda — taxes your ability to stay the course. Most psychologists agree that our willpower is a limited resource.

So while this study did not track calorie consumption, the group blocked from drinking diet sodas most likely ate (or drank) more calories over the course of the 12-week diet.

Since the study lasted just 12 weeks, it remains to be seen whether artificial sweeteners are beneficial in the long-term, says Susan Swithers, a professor of Behavioral Neuroscience at Purdue University. Swithers authored a report last year that found that diet soda drinkers have the same health issues as those who drink regular soda. It found that people who drink diet soda may be "at increased risk of excessive weight gain, metabolic syndrome, type 2 diabetes, and cardiovascular disease," according to the study.

"What the prospective studies actually suggest is that if you go out 7 years, 10 years, 15 years, 20 years, the cohorts of individuals who are consuming diet sodas have much worse health outcomes," says Swithers.

Those studies show a correlation, and are not designed to show causation. But some researchers like Swithers suspect artificial sweeteners ultimately increase the desire for sweets.

"Doing these short-term studies that look at weight can't really tell us anything about whether or not these products are contributing to these increased risks," says Swithers. "And it's really hard to look at the (long-term) data and come up with any argument that they're helping."

This is what happens when you drink soda

It's no news flash that soda &mdash; diet or otherwise &mdash; is bad for health; even those who happily indulge in a can-a-day (or more) habit can rattle off at least two or three negative effects of soda consumption. But when it comes to the effects of soft drink consumption on the human body, the total picture is downright scary.

"It makes sense that it would have been harder for the water group to adhere to the overall diet than the (artificially-sweetened beverage) group," says Hill.

He added, "The most likely explanation was that having access to drinks with sweet taste helps the (artificially-sweetened beverage) group to adhere better to the behavioral change program."

In short, this study addresses the question of whether a regular diet soda drinker should attempt to kick his or her habit while also attempting to lose weight, not whether we should all drink more diet soda in order to lose weight.

Artificially-sweetened beverages "are not weight-loss enhancers, so it's not anything in the compounds themselves that are promoting weight loss," says Hill.

Kristi Norton, a regular diet soda drinker before the study began, was assigned to the group that required her to kick the habit. At the time of her CNN interview, she was not aware of the study's findings.

She says she lost 12 pounds during the course of the study, but the real difference is in how she feels.

"I feel like I could 1000% tell the benefit of drinking water only. I felt better, I had more energy, I felt healthier, I just generally felt way better," says Norton. "And I can feel the difference now when I drink a diet drink, I can feel this 'heaviness'."