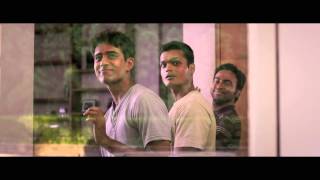 SALT LAKE CITY — Your David and Golliath story this weekend comes in the form of Disney’s small-budget baseball movie, “Million Dollar Arm,” facing off against the towering, juggernaut of a monster film, “Godzilla.”

Marketing and production values definitely favor the iconic Japanese reptile, but that’s not stopping actors Alan Arkin and Bill Paxton from going to bat for the movie they hope you’ll choose this weekend.

“We're coming out when these big sets of Hollywood waves are coming with huge promotional budgets. We're kind of hoping this is the Little Engine That Could,” Paxton told us in a recent interview.

“Million Dollar Arm,” which follows the true story of sports agent J.B. Bernstein as he looks for the next great American baseball pitcher in India, plays out like a sort of happy marriage between “Bend It Like Beckham” and “Moneyball.”

“My favorite thing about it was the respect and warmth and love that they show for the Indian culture,” said Arkin. “It's very moving. I thought the treatment of the Indian kids was really wonderful. There's a lot of laughs, but never at anybody's expense. All the humor is character-driven humor, which of course is the best kind of humor.”

“I was moved by this script the same way Alan was,” Paxton continued. “It starts out where the American sports character of JB goes over there. He's really kind of a two-bit hustler. He's going to learn something a little deeper about life, but he's desperate to make a score …”

Paxton, who plays USC pitching coach Tom House in the film — an unorthodox trainer who is tasked with reshaping the way the boys, Rinku and Dinesh, throw a baseball — told us a little bit about the time he was able to spend with House.

“He's not only a great pitching coach, but he's also a great life coach. These athletes of all ages, of all sports, come to seek his counsel and his advice. It's not just the physical nature of his approach; it's really the mental game that he helps these guys prepare. By the end of the day he was already doing it to me. There's a little bit of a Jedi master kind of thing going.”

When asked about Arkin’s character, Ray, Arkin explained, “He ends up being JB's fairy godmother. He ends up having the key that opens the door that's a necessity to make the whole event work.”

As a relatively unknown story, “Million Dollar Arm” still holds a lot of surprises for audiences while tapping into what we’ve grown to love so much about Disney sports films. Still, Arkin and Paxton agree that many of the moments likely to connect with viewers are the quieter, smaller notes.

“I think there was a moment in the script where Jon Hamm is going downstairs and all of a sudden he passes this makeshift altar that these guys have made,” Paxton says. “But then he learns, he comes to appreciate, they are more rich in terms of their cultural heritage and their belief system than he is. He is kind of a bankrupt soul who's trying to find, he's not even looking for any enlightenment or any acknowledgment that there might be something greater out there. So they both have something to teach each other, and I think ultimately it's the Jon Hamm character who has the most to learn and the farthest to come. I think really, at the end of the day, the story is really about his character becoming aware beyond the shallowness of his pursuits.”

So will the heart of “Million Dollar Arm” be enough to defeat Godzilla? We’ll know soon enough. But let us know what you'll be seeing and why in the comments. We’ll be discussing the best ones on this week’s Flicks Junkies show at OK.com. Travis has been covering movie news, film reviews and live events for Deseret News and KSL.com since 2010 and co-hosts the FlicksJunkies podcast. You can contact Travis at tspoppleton@gmail.com.