5 of the greatest movie monsters 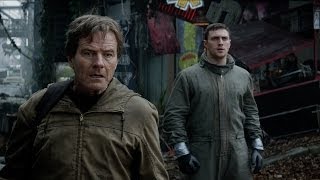 MONSTERVILLE — “Godzilla” is just a few days away from opening, so in preparation for the big summer flick we thought we’d take a look at five of the best monsters from movies.

We’re not including monsters that existed or were rumored to exist. Therefore, you will not see the T-Rex from “Jurassic Park” on here or Harry from “Harry and the Hendersons.” Yes, I know it’s disappointing.

With that said, we also left off King Kong, because while he doesn’t exist he’s just a massive gorilla, so we avoided it.

Now that we have that laid out, let’s get this going.

How could we not start off with this one?

Godzilla is undoubtedly one of the most, if not the most recognizable and iconic movie monsters of all time.

The giant lizard has starred in more than 30 films and if this summer’s “Godzilla” does what Warner Bros. is hoping we’ll see even more.

The monster is terrifying, huge, powerful and it blows fire. It can swim, tear down buildings and throw a mean kangaroo kick. There’s a reason when you hear the words “monster movie” you think of Godzilla almost every single time.

Godzilla is the king of the monsters folks and we just hope that when he emerges from the ocean it’s because he’s got a sweet spot for the human race and not looking to get rid of us.

“Tremors” is kind of a ridiculous movie that is a guilty pleasure in more homes than people may like to admit.

The 1990 film starring Kevin Bacon features earth-burrowing worm-like creatures called graboids that will scare you to death, and then eat you.

Graboids are ugly, fast, relentless and smarter than we’d like to give them credit for. If you’ve never tangled with a graboid consider yourself lucky. Ask Kevin bacon, it’s no picnic.

These things find you off of sound waves and when it really comes down to it there’s no real good place to hide.

Sure, mogwai’s are adorable, but you break any of the rules and you’ve got Gremlins on your hands and that’s the last thing you want.

Gremlins are little monsters with attitude, wit and murderous intentions. These little things don’t care if it’s Christmas or your birthday; they just want to ruin everything. Sure, they may make you laugh with their strange and goofy antics, but that laughter will abruptly stop when they’ve grabbed a cleaver and are looking to make some dinner.

Gremlins are mean and ruthless and let’s all promise each other that when the tiny shopkeeper tells us we're not ready for the mogwai that we listen.

The Cloverfield monster is one of the only things on this list that could probably hold its own with Godzilla, but let’s be honest, Godzilla is going to win.

The Cloverfield monster shows up out of nowhere, has a taste for destruction and he really doesn’t like helicopters, so don’t even try.

This thing is ugly, gigantic and sprawling, a really awful combination.

If you happen upon the Cloverfield monster hide, not under a bridge, and pray Godzilla is on his way. That’s really all we can do.

This one was a package deal for two reasons.

First, the Predator and the xenomorph from “Alien” are basically two peas in a pod. They may not always get along, but these monsters are cut from the same cloth.

The second reason is simply because we wanted to pull one over on you and have six monsters instead of five.

These two really don’t like humans and will take them out either for sport or for dinner. However, sometimes these monsters just leave us alone, but that’s only when they’re fighting one another and we end up being collateral damage. Anyway you slice it it doesn’t look good for us humans.

These two are so iconic that they will haunt the nightmares of all those who saw these movies when they were way too young. Thanks for nothing 1980’s.

That’s not true 80’s, you gave us “Back to the Future” and “The Goonies,” but in our defense you also gave us irrational fears of jungles, science, Carl Weathers and space travel.

Both the xenomorph and predator will incite panic and fear in humans until the end of time. The only thing that may help us get to sleep peacefully is if Sigourney Weaver and Arnold Schwarzenegger are sitting in rocking chairs flanking our bed, but even that's no guarantee.

Anyway, what are your favorite movie monsters