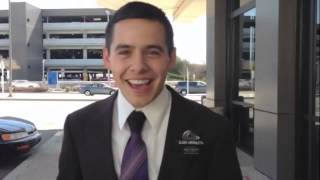 Words we have been waiting for.....

SALT LAKE CITY — After serving two years as a missionary for The Church of Jesus Christ of Latter-day Saints, pop singer David Archuleta is home.

Archuleta left for his LDS mission on March 28, 2012, telling his fans on YouTube that he was going somewhere in South America and that the decision was a “very personal thing.”

“I wanted to keep it that way, so I hope you guys respect that,” he added. “I’ve been able to bring you guys on this journey so far, but I hope that you guys will respect that this will be more of a personal thing; that I’m trying to focus on something else now, not my career, not trying to do music.”

Although Archuleta was serving a mission, his record company released a single called “Don’t Run Away,” which is the first single of Archuleta’s newest album “No Matter How Far,” in the spring of 2013.

Whether Archuleta will resume his music career was not made known in his short video.