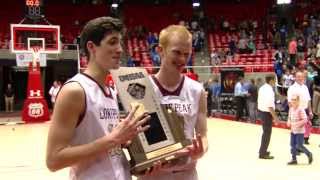 As the son of former Timpview High head coach Tim Lewis, he remembers watching legends like Danny Vranes, Fred Roberts and Devin Durrant. He played with and against the likes of Shawn Bradley, Ryan Cuff, Jimmy Soto and Ken Roberts while in high school. He recruited Utah high school players as a college coach. He’s coached Tyler Haws and the Emery brothers at Lone Peak.

He’s seen the best players in Utah over the past 30 years and believes T.J. Haws has placed his name among the elite in Utah history.

“He’s as good as or better than any player that has ever played in the state,” Lewis said.

(T.J. is) as good as or better than any player that has ever played in the state.

That’s high praise for the future BYU Cougar, who is the only player in state history to be a starter on four consecutive state championship teams.

“It’s so special,” Haws said. “We knew that coming into this season that we could make history. We worked so hard in practice. We fought through tough times and it’s such a good feeling.”

Haws completes his high school basketball career 10th all-time in scoring in state history and third in 3-pointers made. He was not only first in Class 5A in scoring, but second in assists also.

“He’s got to be the best scorer, but he’s also got to be the most unselfish guy because he gets double teamed,” Lewis said. “He has to trust his teammates and you saw that tonight.”

Haws saved his best for last.

He scored 29 points and made eight 3-pointers in Lone Peak’s 84-66 win over Pleasant Grove in the 5A state championship Saturday night at the Huntsman Center.

“We made history this year and I’m so happy to be a part of it and it’s been such a fun ride,” Haws said after cutting the net for a fourth time. "I’m so happy it ended the way it did.”

Haws averaged 31 points per game in the state tournament.

After dedicated most of his life to the game of basketball he will now change his focus for the next two years: He will serve an LDS Church mission to Lyon France.

When he returns he looks forward to continuing his basketball career at BYU, but for now he will enjoy the moment and savor the feeling that comes from making history.

“There is some relief,” Haws said after achieving the goal of winning a fourth state championship. “Now it’s time to celebrate.”