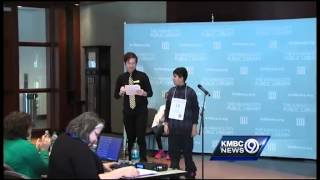 For more than an hour, seventh-grader Kush Sharma, 13, and fifth-grader Sophia Hoffman, 11, went toe-to-toe in the continuation of the Jackson County Spelling Bee, which began two weeks ago but had to be extended after the two breezed through the word list provided by the Scripps National Spelling Bee, then 20 more words picked out of the dictionary.

The contestants had no problem correctly spelling words like "boodle" and "slobber," often asking the moderator for a word's origin, definition or part of speech. But at the end of the 28th round, Sophia appeared puzzled when attempting to spell "stifling," and even more so when the bell rang to indicate she had gotten it wrong.

Following a lengthy break to listen to audio of the round to make sure Sophia had heard the word correctly, the judges ruled that she had misspelled it, meaning Kush could claim the title if he correctly spelled his word in the 29th round.

After being given his final word, "definition," Kush drew chuckles from spectators watching from a different room in the Kansas City Public Library when he asked for the definition. He promptly spelled it correctly and won the bee.

The end of the match brought to a close a whirlwind two weeks for Kush, a student at Frontier School of Innovation in Kansas City, and Sophia, a Highland Park Elementary School student in the Kansas City suburb of Lee's Summit.

Three days after they finished in a tie on Feb. 22, both of their families were flown to New York to make television appearances on CNN and "Good Morning America." The two said they had become close friends because of the experience.

"I was pretty sad when she got that word incorrect," said Kush, who now moves on to the National Spelling Bee in Washington, D.C., in May. "That's the game, you know? It's going to come down to one person, whether you're friends or not."

Sophia said she was excited that she made it so far in the bee and that she planned to compete again next year. Kush said he, too, would be back, and he wouldn't be surprised if the two dueled even longer next year.

Mark Hoffman, Sophia's father, called his daughter a tough kid who gained a lot from the competition despite the emotionally upsetting conclusion.

"I think it is part of the growth of the kids to learn how to work through disappointment and come out stronger," he said.