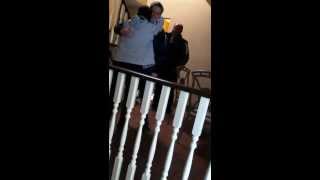 My family reacting to my 130 pound weight loss

SALT LAKE CITY — When son Lucas Irwin couldn't come home during summer break, Susan and Jeff Irwin were disappointed but understanding. But they didn't know it was all part of Irwin's plan to give them an unforgettable Christmas present revealing his 130-pound weight loss.

Weighing in at 300 pounds in December 2012, Irwin wanted to make a lifestyle change to become healthier. He made a promise to himself to lose weight.

"It’s something that I have struggled with all my life,” Irwin told TODAY.com. “So I started December the 28th of 2012 and just went for a year."

Irwin started out eating 1,350 calories a day and didn't worry about incorporating exercise right away. He kept a food log to keep himself accountable and joined the Lose It board on Reddit for support since he decided to keep his weight loss from his family as a surprise.

“Social media was amazing for my weight loss journey,” Irwin said. “Especially the Reddit 'LoseIt' community. You can post your progress and they would help with diet tips and that sort of thing.”

I lost 95 percent of the weight just through changing my diet. I only ate 1,350 calories a day. I didn't exercise at all until maybe seven or eight months in.

“I lost 95 percent of the weight just through changing my diet,” Irwin said. “I only ate 1,350 calories a day. I didn't exercise at all until maybe seven or eight months in.”

By keeping his weight loss effort a secret from his family, Irwin made his holiday homecoming even more special. Since Irwin only goes home about once or twice a year, it was easy for him to find an excuse not to come home during the summer. And the resulting video from his big reveal was worth the wait. The video has already racked up over 1.2 million views on YouTube.

Even though he was extremely successful in his weight loss journey, Irwin said he was still scared right before he came down the stairs to surprise his parents.

“When I saw my parents for the first time, I was really nervous,” he said. “I was shaking and … it was very surreal."

His dad Jeff couldn't believe his eyes when he first saw his son.

“All of the sudden, down the stairs he came,” Jeff told TODAY. “And he looked just fantastic. I was more stunned than anything else. But inside, I was just beaming. I was just ... I was over the moon.”

All of the sudden, down the stairs he came. And he looked just fantastic. I was more stunned than anything else. But inside, I was just beaming. I was just ... I was over the moon.

Step-mom Susan was just as happy for Irwin, squealing with delight in the video.

“Just picturing it in my mind again, it brings back tears to my eyes again,” Susan said. “I am so proud of him.”

The health and diet editor for NBC News, Madelyn Fernstrom, told TODAY that some studies show that keeping your weight loss goal to yourself can sometimes be better than sharing them with everyone. If you are accountable to others, it can sometimes backfire or set you back if you lose that support. Irwin was successful because he was accountable only to himself and relied on himself for motivation.

“When you decide to lose weight and put your mind to it, that’s the only key to success,” Fernstrom said. “A parent or spouse can be nagging you, but it is only when you decide it’s something important to you that you will get this result. That delight that his parents were expressing is that he took charge of his life.”

Fernstrom said she was moved when she watched the big moment of reveal between Irwin and his family.