For New York lottery winner, $1M was blowing in the wind 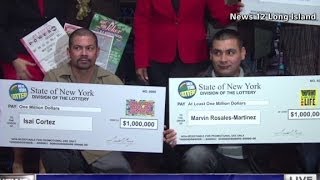 NEW YORK (CNN) — In the post-Superstorm Sandy destruction, New York landscaper Marvin Rosales Martinez was clearing storm debris with a leaf blower when he discovered an unknown treasure hidden in a pile of leaves.

The damp "Win $1,000 a Week for Life" scratch-off ticket could change his life.

Rosales Martinez, 27, a resident of Hicksville on Long Island, was awarded his $1 million lottery prize on Friday, more than a year after he claimed the winning ticket. He found the ticket among leaves in October 2012.

According to a New York Lottery statement, Rosales Martinez first brought the ticket to a 7-Eleven, but the store couldn't verify it.

It wasn't until November 9, 2012, when Rosales Martinez brought the ticket to the lottery's Long Island Customer Service Center that officials confirmed that it was a winning ticket.

Then, there was a "standard and thorough internal security investigation" to ensure the validity and ownership of the ticket.

According to Lee Park, a lottery spokesman, the review found no reason to believe that the ticket "wasn't rightfully the property of Mr. Martinez. There was no report of theft or of a ticket being misplaced."

"It should be noted that Lottery tickets are bearer instruments," said Park, referring to instruments that may be converted to cash by whomever holds it. "In instances such as these, it's standard practice for the lottery to require a one-year waiting period before awarding the prize in case anyone else comes forward."

In this case, no one stepped forward.

Rosales Martinez was one of five New York lottery winners to claim a prize Friday.

The recipient opted to receive his jackpot prize as a one-time lump sum payment. He will receive a payment of $779,106, netting him $515,612 after required tax withholdings, according to the release.

Rosales Martinez, who could not be reached for comment, told lottery officials that he planned to share his good fortune with his family.