IRON COUNTY — Deputies are asking for help to locate an inmate who failed to return after being released for a doctor appointment.

James Allen Logan, 33, was granted a release from the Iron County Correction Facility for a doctor appointment on Dec. 20 by 5th District Court Judge John Walton, according to the Iron County Sheriff's Office.

He failed to return by 6 p.m., which was a condition of his release. Detective Sgt. Del Schlosser said deputies have been looking for Logan since Dec. 20.

They believe Logan is currently in the Las Vegas area. He was charged with drug possession and is not considered to be dangerous. 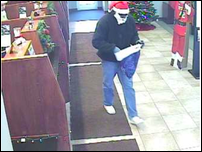 A man partially dressed as Santa Claus was apparently more interested in taking than giving on Christmas Eve.

Investigators described Logan as being a white man with brown eyes and brown hair. He is 220 pounds and 6 feet tall.

Identifying marks include several tattoos. He has a skull tattoo on his arm, a sun tattoo on his right calf, his name tattooed on his back and a clown on his left arm.

He was born in Texas and worked as a meat cutter, according to investigators.

Those with information about his location can contact the Iron County Sheriff's Office by calling 435-867-7500 or texting 274-637 with the keyword ICSOTIPS.