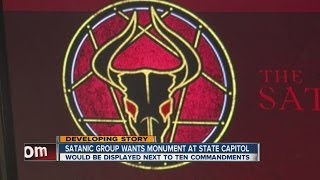 OKLAHOMA CITY (AP) — After hearing from satanists, Hindus and an animal rights group, the panel that oversees the grounds at the Oklahoma Capitol says it's not taking any more requests for new displays at the Statehouse.

The Oklahoma Capitol Preservation Commission voted Thursday to approve the ban until a court dispute over the current Ten Commandments monument is settled. It was that monument that the New York-based Satanic Temple said opened the door for it to seek its own display at the Statehouse in Oklahoma City.

That was followed by similar requests from a Hindu leader in Nevada, the People for the Ethical Treatment of Animals, and the satirical Church of the Flying Spaghetti Monster.

"At this time, I believe action by the (commission) on any of these requests would be premature given that the lawsuit has yet to be decided," said Commission Chairman Trait Thompson.

The Republican-controlled Legislature in 2009 authorized the placement of the privately funded Ten Commandments monument at the state Capitol, and former Gov. Brad Henry, a Democrat, signed the bill into law. It was placed on the north steps of the building last year, and the Oklahoma chapter of the American Civil Liberties Union has sued to have it removed.

Brady Henderson, legal director for ACLU Oklahoma, said that if state officials allow one type of religious expression, they must allow others as well.

"The best solution is to say: 'Let's just get out of the religious monument business," Henderson said. "This isn't an issue that can be solved with more and more religions or points of view represented."

The best solution is to say: 'Let's just get out of the religious monument business.' This isn't an issue that can be solved with more and more religions or points of view represented.

The Satanic Temple said earlier this month that it would file a formal request with the commission. A spokesman for the group said it's nearly finished with the application and that the moratorium should not be applied retroactively.

A fundraising website dedicated to erecting the satanic monument showed the group had raised nearly $8,000 toward its $20,000 goal as of Thursday afternoon.

"I can't tell the Legislature what to do," Thompson said. "That's completely up to them."