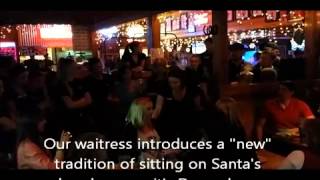 SALT LAKE CITY — A Utah woman had a beautiful surprise when her soldier husband returned home in time for the birth of their first child.

It might be every child's Christmas nightmare to catch mommy kissing Santa Claus. But, there was a big Santa kiss in Utah recently and it was all caught on camera.

Family members surprised Brittney Dalby with a birthday party at her favorite restaurant, Texas Roadhouse. However, Brittney didn't realize that the birthday dinner wasn't the only surprise of the night.

When restaurant workers came to the table to do their routine birthday wish, they brought along something new; a man dressed as Santa Claus. Instead of making the birthday girl sit on the traditional Texas Roadhouse saddle, they told her she had to sit on Santa's lap.

"I was really embarassed," Brittney said, "but it was Santa's lap so I had to do it."

With a well rehearsed "Yee-Haw", everyone in the restaurant wished Brittney a happy birthday and at that moment Santa tried to sneak in the second surprise — A kiss.

"I thought it was an employee trying to get fresh!" Brittney said.

But after a second look, Brittney realized the Santa Claus was her husband, Ryan. Brittney thought her husband was still overseas serving in the military in Afghanistan. The Army Specialist wasn't scheduled to come home for a few more weeks. However, because Brittney was 9 months pregnant, the military allowed Ryan to go home early.

"I just decided not to tell Brittney because I wanted it to be a surprise," Ryan said.

For two months, Ryan said he worked on the plan to surprise Brittney. His parents and Brittney's parents secretly picked him up from the airport and handed him the Santa suit. They set up the surprise birthday party as a "cover" and coordinated with the restaurant to make the whole thing happen.

"I was nervous," Ryan said, "I was trying to disguise my voice and pull the beard up as high as I could."

"I sat on his lap and he was shaking," Brittney said. "His knee was shaking so I just put my arm around him and patted him on the shoulder and I was like 'Oh, Santa, it's okay!'"

Ryan said he thought she'd recognize him a lot sooner.

"I pulled off the beard and I went to kiss her but she turned her head," he said. "It took her a few seconds to realize it was me. After that it was just a lot of tears and hugs."

Hours after the surprise of her life, Brittney went into labor. She delivered the couple's first child, a little girl named Londyn, on Dec. 8. She said it seemed Ryan wasn't the only member of the family working on an early surprise. Londyn wasn't due until Dec. 28.