Parents plead for person who hit, killed their son to confess

6PM: Parents plead for person who hit, killed their son to confess

SPANISH FORK — Five months after their teenage son was hit and killed by a car, the parents of Nate Haun still don’t know what happened.

Investigators don’t know if the teen’s death was an accident or intentional, whether it was someone who knew him who hit him and left him to die on the road.

On Saturday, July 13, Nate Haun was found dead in the middle of the road at 2000 W. Arrowhead Trail, an area east of I-15, between Salem and Payson. Investigators said he was hit by a speeding truck.

“(There were) no brake marks, no skid marks, no anything in the area,” said Quin Fackrell, an investigator with the Utah County Sheriff’s Office.

“I think it would bring us a lot of closure just to know what happened and why,” Tammy Haun said.

If their son’s death was an accident, the Hauns said they can forgive.

With laughter and tears, Tammy and Preston Haun talked about their son, who would have turned 18 last month.

“He’s a happy kid,” his mother said, “always wanted to make you laugh." 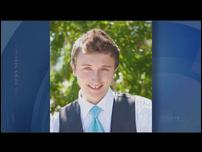 Authorities in Utah County say a 17-year-old boy may have been walking home Friday night when he was hit and killed by a car. They still don't know who was driving, or why that person didn't stop. It appears the teen's parents are turning to Facebook for some answers.

Nate Haun was counting down to that milestone birthday he didn’t live to see.

“We had a party at his gravesite and had all his friends and sang ‘Happy Birthday’ and had cupcakes and celebrated,” his mother said.

Authorities say Nate Haun was walking home from a party where kids had been drinking. Initially, most of them wouldn’t cooperate with the investigation.

“That first couple months, there were all kinds of rumors and stuff going on,” Preston Haun said.

Investigators had to sort through fact and fiction. Most of the kids at the party have since given statements. Authorities said one person claims to know what happened to Nate Haun, but the statements aren’t credible.

“I don’t know if … they just want to inject themselves into the investigation,” Fackrell said. “We haven’t completely 100 percent ruled out anything at this point.”

Investigators said they do have evidence from the scene. They’re waiting on test results from the state crime lab, which takes some time. They’ve had another police agency take a look at the case, and they’re also working with a forensic consulting firm to re-create the crime scene.

Like Nate Haun’s parents, investigators are pleading for the public’s help to determine what happened..

“That driver definitely knows that they hit somebody or hit something,” Fackrell said. “They would have … sustained at least some damage to their vehicle based on his injuries that he received.”

Nate Haun’s parents said if he were alive, he would have recently gotten his GED. A budding artist, he may have also been in art school. A drawing, which he began a week before his death, is on his headstone.

“I picked that picture because it’s just peaceful, and that’s what Nate loved,” Tammy Haun said.

The family is hopeful they’ll eventually find out what really happened. They bought a lantern, which they’ll light for Nate on Christmas Day — "(to) let him know we remember him and that every day we think about him,” Preston Haun said.