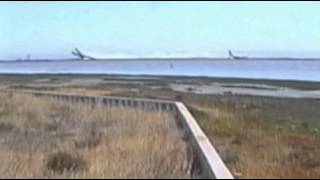 SAN FRANCISCO (AP) - The landing of an Asiana Airlines flight at San Francisco International Airport appears normal at first, but about 10 seconds in to newly released video of the tragedy, the image turns into a streak of smoke as the tail shears off and the rest of the plane barrels forward. The aircraft then spins and comes to a stop in a cloud of dust.

The video released by the National Transportation Safety Board on Wednesday captures part of Flight 214's final descent and then its crash on July 6. Three people were killed and 200 more injured.

Investigators would later determine the flight came in too low and too slow, then clipped a seawall, breaking off part of its tail.

The NTSB held a hearing about the crash on Wednesday.