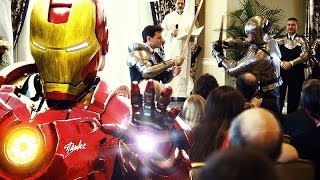 (HLNtv.com) — Every young man dreams about his wedding day, but when the young man in question is a video game CEO, those dreams can be slightly more geeky.

The Catholic ceremony in St. Petersburg, Florida, was going swimmingly until the priest asked if anyone knew why the couple shouldn't be joined in marriage.

That one question unleashed a cavalcade of nerd fantasy that included a sword fight with an armored knight, ninjas flipping down the aisle and a minor tiff between Iron Man and Batman. The video of the wedding battle has gotten more than 300,000 clicks on YouTube.

"I never dreamed it would have gone so far," Bohn told HLN.

Bohn, who worked on AdventureQuest Worlds for the past 11 years, has really bonded with his user base. They know him as his character name, Artix.

The wedding was kind of a life imitating art kind of thing. I thought we are going to have the time of our lives and entertain people and hopefully not decapitate anyone.

As Artix, Bohn has hosted many weddings in his online fantasy world, but his real-life wedding is one of the few times he's stepped out from behind his avatar and let users see the real him. Bohn posted a nine-minute excerpt of his Florida wedding-turned-bridal battle on his gaming site and his company's YouTube channel.

"The wedding was kind of a life imitating art kind of thing. I thought we are going to have the time of our lives and entertain people and hopefully not decapitate anyone," Bohn said.

And art will imitate life on December 13, when Bohn rolls out a video game version of his wedding for the users, titled, what else, "Lord of the Wedding Rings." The game guru was so serious about keeping the wedding elements a surprise for his users that he declared the November nuptials a photo-free zone so that no pictures would leak out on social media or gaming message boards.

And what did the bride think of the fantasy wedding crashers? Bohn says she was all in on his wedding vision from day one.

"I don't like normal. She's the only girl I've ever met that never called me weird. I talk about vampires, werewolves and cyborgs all day long and never heard the "w" word," Bohn said. "She has enough of the essential crazy to be with me for life."