SANDY — Real Salt Lake notified fans late Tuesday night via Twitter that all MLS Cup tickets purchased via Ticketmaster with a leaked code would be cancelled because the code was declared invalid by Sporting Kansas City and Ticketmaster.

The leaked code was intended only for Sporting Kansas City season ticket holders, but when RSL fans went to use it, the code worked fine and many fans were able to secure tickets and a seat inside Sporting Kansas Park on Dec. 7.

To many RSL fans, it just looked like a regular pre-sale code. Jacob Jones saw it posted on the Royal Army Away Facebook page. He bought 12 tickets.

RSL fans tweeted throughout the day that they were excited to have purchased tickets at a discounted price and were headed to Kansas City to support the Salt Lake club.

In my mind, I made a purchase with a legitimate code, I gave them my money, they took my money. Those tickets are mine.

But the excitement was halted at 9:20 p.m. when RSL tweeted, "#RSL fans :: if you bought @MLS Cup (tickets) today via Ticketmaster, the leaked code was declared invalid by SKC/TM & your tix will be cancelled."

This puts fans like Jones in a sticky spot. He made travel arrangements, thinking he had purchased tickets legitimately. He even resold some.

RSL fans immediately reacted to the news and started blowing up Twitter, expressing their frustrations with the Ticketmaster issue. The frustrations pointed blame at MLS, Ticketmaster and even SKC fans and the Kansas City-based club. Real Salt Lake fan Jake Simons was furious.

"In my mind, I made a purchase with a legitimate code, I gave them my money, they took my money. Those tickets are mine," he said.

RSL confirmed to fans via Twitter that even SKC fans that had purchased tickets on Tuesday with the leaked code would have their tickets cancelled, even their season ticket holders. The tweet said, "To be clear, ALL tix bought today with that code are invalid, regardless of where/how/who bought them."

But how did the pre-sale code get leaked? 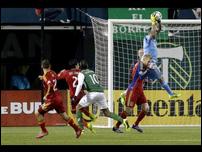 Real Salt Lake was crowned the Major League Soccer Western Conference Champion Sunday night and punched its ticket to the 2013 MLS Cup final with a 1-0 win over the Portland Timbers in the Rose City.

"The code was put on a comment section of a Kansas City media outlet article," explained Real Salt Lake Media Services Manager Sam Stejskal. "That code was then distributed over social media and picked up by a lot of RSL fans and a lot of Kansas City fans."

Stejskal said the team will have an allotment of tickets, but it won't be very big.

"If you want to ensure that you get tickets, get them as soon as you can via StubHub or via a secondary market," Stejskal said.

RSL kept fans informed about the situation with a few other tweets late Tuesday night via Twitter, tweeting, "Emails from Ticketmaster will go out tomorrow explaining use of the invalid code and the timeline for refunds."

According to Ticketmaster.com late Tuesday night, an offer code was required to purchase tickets, since tickets for general admission don't go on sale till Dec. 2 at 10 a.m. CST, just five days before the MLS Cup.

As of 11 p.m. Tuesday, neither Ticketmaster.com nor Sporting Kansas City had addressed the issue on their website.