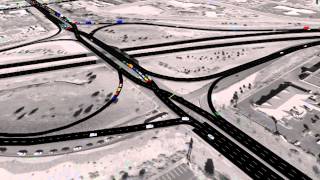 The Utah Department of Transportation reopened the interchange at I-15 and St. George Boulevard after a remodel of the bridge to flow as a diverging diamond interchange, similar to interchanges on SR-201 and Bangerter Highway and 500 East and I-15 in American Fork. The DDI also created a pedestrian crossing through the busy intersection from the east to the west.

“So far as the construction, and that scares a lot of people, this has probably been one of our most successful urbanized projects down in this part of the state so far as working with businesses,” said Regional communication manager Kevin Kitchen. “They have been very cooperative and just ecstatic that we’ve been able to do this.”

A DDI briefly switches traffic to the opposite side of the road, eliminating left turn signals and allowing left turns and through traffic to flow at the same time. The new interchange will eliminate traffic caused by the old model and allow vehicles to efficiently access the hotel and strip mall on River Road, on the east side of the freeway and interchange.

The construction portion was completed in time for Black Friday, about a week and a half ahead of deadline, Kitchen said.

10 big Utah road projects you should know about this year

With summer driving season approaching, the Utah Department of Transportation has announced its top 10 road construction projects for the rest of the year.

“Our goal was to have it open by Black Friday because we knew a lot of folks, especially if we got storms on the Wasatch Front, would be heading south,” Kitchen said. “This was a very big deal for this community to be able to cash in on Black Friday and get those shoppers that come down for the warm weather. We wanted to make sure that would happen. That was part of our proposal and part of our communication plan from the very beginning.

The addition of a 10-foot wide pedestrian crossing, partially separated by a 4-foot tall barrier, runs down the median of the interchange over the bridge and eliminates some of the interaction of the pedestrians with traffic.

Budgeted for $16.3 million, UDOT estimates it came in approximately $2 million under-budget. A final total will not be released until after the project is fully completed in December. The project was a design-build partnership with a private engineering firm and a construction company, Wilson & Company and Wadsworth Brothers Construction, respectively.

Though the teams worked mostly in northern Utah, Kitchen and project manager Kim Manwill credit the partnership and a good communication plan with speeding up the project and coming in under budget. Other design-bid-build projects, typically larger scale and associated with a corridor, have taken up to a year and a half, whereas this project took five months to complete.

Kitchen said non-functional additions, like lighting and markings in the pedestrian walkway are still in-process. Pedestrians are asked to wait to use the crossing until everything is completed on Dec. 19.