PROVO — Three federal inmates who served time with Martin MacNeill in Texas told a jury on Tuesday that the former doctor denied the prison rumors that he killed his wife, but also told them that police couldn't prove any crime.

"I just asked him, ‘Doc, they say you killed your wife,'" a man identified only as Inmate No. 3 testified in Provo's 4th District Court. "He was like, ‘No, I didn't murder my wife. If I did, they don't have any evidence ... and they couldn't prove anything."

The inmate, who is serving a 27-year sentence for drug convictions at the Texarkana Federal Prison, said he and MacNeill lived in a cellblock known as the "chicken coop" and were workout buddies.

The man was the first of five state and federal prisoners prosecutors have called to testify against MacNeill, 57, a former Utah County physician and lawyer facing murder and obstruction of justice charges in the April 11, 2007, death of his wife Michele.

The former California beauty queen, 50, was found dead and partially submerged in the bathtub of the couple's Pleasant Grove home about one week after having plastic surgery. Prosecutors say MacNeill overdosed his wife on pain medication and other drugs before drowning her in the tub.

Three of the five inmates testified Tuesday, as the trial began its fourth week. Out of concern for their safety, none were identified by name.

MacNeill met the men while serving a four-year term for a 2009 conviction on two counts of aiding and abetting aggravated identity theft. The charges stem from MacNeill's theft of identification documents belonging to his 16-year-old adopted daughter. He then used the papers to create a new, fake identity for his mistress, Gypsy Willis. She was also charged and served a federal prison sentence. 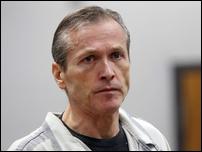 Four inmates who knew Martin MacNeill in federal prison are expected to tell jurors Tuesday that the former doctor used slurs when speaking of his wife and told them that police could never prove that her death was a murder.

The jury of six men and five women won't hear the details of those crimes — a judge has labeled the information prejudicial and inadmissible — although both of the inmates who appeared in court Tuesday indicated that MacNeill held Willis out as his wife while in prison.

"He said him and his wife were locked up," the inmate testified. "So that didn't mean to me that she was dead."

Later, the three inmates said they had heard prison rumors, saw a People magazine article and/or a TV story which detailed accusations about MacNeill's affair and his alleged role in Michele MacNeill's death. That information led all three to separately ask him if he'd murdered his wife.

"He said, 'Well if they could prove it, do you think I would be sitting here talking to you?" Inmate No. 4 testified. "He said, 'The bitch drowned.'"

The judge earlier ruled that the inmates could testify of the alleged use of that derogatory term.

"He just said, 'They can't prove it,'" Inmate No. 2 said of MacNeill's response to his question.

Two of the men also told the court that MacNeill was angry and used disparaging remarks about both Michele MacNeill and his elder daughters after being denied an early release from prison to a halfway house.

He said, 'Well if they could prove it, do you think I would be sitting here talking to you?'

"He said they didn't give him a halfway house because of his 'effing' daughers and his 'b' of a wife," Inmate No. 3 said, avoiding using the actual words in court.

Defense attorney Randall Spencer tried to discredit that inmate by asking him about instances in the past where he had acted as a jail house informant for authorities and lied about a murder plot against a federal prosecutor in order to get moved to new prison housing. The ruse was so elaborate that the inmate even injured himself with a razor and blamed another person, Spencer said.

"I had to come up with that scheme to get them to get me off the compound," the man said. But he insisted the information he provided to investigators "panned out" and led to the incarceration of 26 people.

The men also testified that they had been promised no favors or reduced sentences in exchange for their testimony against MacNeill. Both inmates No. 3 and 4 claimed to be speaking truthfully in court, but said they fear for their safety upon return to prison, where the code of conduct dictates: "don't snitch, don't mess with gays and don't steal."

"Probably will get a death sentence for telling on him," Inmate No. 4 said.

None of the three men said MacNeill ever confessed to him and Inmate 3 testified to having "no problem" with his former work out partner, with whom he lifted weights and ran sprints in the prison yard.

Prosecutors said they expect to wrap their case up with three final witnesses Wednesday, including a federal inmate and a Utah County Jail inmate, one of whom is expected to say MacNeill told him he gave his wife drugs "to get her to pass out and die" and had "held her under the water to help her out."

Willis, whom MacNeill began seeing in 2005 and then moved into his home as a nanny to his youngest children within weeks of Michele's death, is also expected to return to the witness stand.

Spencer said the defense will likely call at least three witnesses, including one of MacNeill's co-worker, his daughter Ada's school teacher, and an ergonomics expert who can discuss the difficulty MacNeill would have had pulling his wife out of the bathtub.