FARMINGTON — A man accused of driving his pickup truck up the steps of the state Capitol was booked into jail earlier this week for investigation of drug-related charges.

On Oct. 22, police say Weston Gerald Green drove his truck up the west stairs of the state Capitol, walked into the building and pounded on the doors of the old Utah Supreme Court room. Investigators say because he resisted arrest, they forcefully took him to the ground. He was then transported to a local hospital where he was admitted for treatment. His injuries and condition were not disclosed.

On Monday, Green was booked into the Davis County Jail for investigation of felony marijuana possession, marijuana cultivation within 1,000 feet of a church, child endangerment and possession of drug paraphernalia. He has since bailed out.

No charges have been filed, and there was no word Wednesday on the status of any potential charges in connection with the incident at the state Capitol.

After he was taken into custody at the Capitol, Green told investigators that he had an active marijuana growing operation at his Layton home, 847 Poplar Circle. 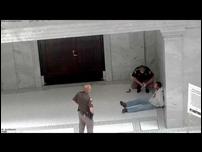 A man who drove his pickup truck up the steps of the state Capitol building was arrested Tuesday.

"Green claimed that he harvested, used and sold the marijuana that he grew in his house," according to a Davis County Jail report.

The Utah Highway Patrol also reported that Green told security officers at the state Capitol that he was there to promote the legalization of marijuana. A search warrant was obtained the next day for Green's house. Underneath a crawl space in the basement, investigators found 18 actively growing marijuana plants in addition to several other plants in various stages of drying and harvesting, according to the report.

The area had large tubs of water, lights, heat lamps, water pumps, filters and fans set up as part of the hydroponic grow operation, according to police.

Toys belonging to Green's young son were kept in a room next to the growing operation, the report states. Green is divorced and his son shares time living with his mother and father. In the same room as the son's toys, police said they found a vacuum sealer machine and packaging materials.

Some nearby residents called Green the "perfect neighbor," noting that he was always polite and helpful to others and they never saw him acting erratically. But they said he also never opened his window shades, particularly those in the basement.