SANTAQUIN — Imagine being perfectly healthy but having the government declare you dead.

As Leonard Cleveland of Santaquin discovered, wrongfully being declared dead can create real hardships, often is difficult to fix, and happens more often than expected.

Cleveland looks perfectly healthy but the Social Security Administration apparently thinks he's dead. As a result, he has not received a Social Security payment since June and his credit cards have been affected.

"They won't respect my credit cards," he said. "I can't go buy food. And I don't carry cash with me any more."

"They ought to be thankful I'm not going down to the welfare office and applying for welfare," he said.

So, what happened? There was a death: Cleveland's wife, Gloria. It appears someone at the funeral home listed both her and Leonard as deceased on the same day in the paperwork sent to Social Security.

"I turned around and wrote a check out, paid for my wife's funeral expenses, left, and thought it was all taken care of until this came down," Cleveland said. 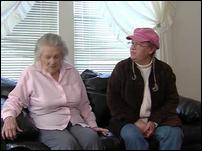 An elderly West Valley City woman is very much alive and well. But due to an error, the Social Security Administration declared her dead.

Long before he contacted us, he tried to convince the government and everyone else he was still alive. He said he made three trips to the Social Security office, waited in line, showed his identification, and actually proved he has not died. But that didn't seem to do the trick.

So, he contacted KSL. We contacted Social Security and officials there declined an on-camera interview. But in an email, the regional office in Denver said mistakes like this are rare.

Causes range from bad information from relatives and funeral homes to typos by Social Security employees.

This type of thing happens to about 14,000 people nationwide each year. Getting the death status changed is not easy.

"The first time we went down, they lost the paperwork," Cleveland said.

Finally his son David contacted Rep. Jason Chaffetz's office and it went to work on bringing Cleveland back to life.

"He's doing what he can," Cleveland said. "I think they said it would be three months before I could even get a check."

Cleveland recently did get the problem resolved, but the experience chipped away at his patience. He doesn't understand why it took an act of a Congressman's office to fix it.