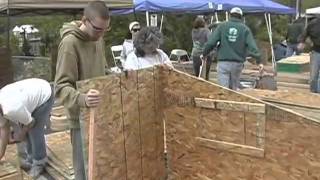 PLEASANT GROVE — Gary Pickering can enjoy sitting in the shade on his front porch on a hot summer day, but it's something he hasn't always been able to do. At one time in his life, after a divorce, he was homeless.

"I lived in my shop for about three years, so I was basically homeless."

Pickering became sympathetic to those he met, who really had nowhere to live.

"I had four homeless people living outside my shop. It was 1988 which was a bad winter but they lived in my van all through the winter."

20 years later in 2009, Pickering was driving through Provo. He saw a homeless man and started to wonder what he could do to help.

For most of us, we could never imagine living in something like this. The space is very confined and not very comfortable. But if you're homeless, it could get you off the street.

"What can I build that's not too expensive?"

Pickering started building small, portable 'micro-houses' for people living on the street. He says they're small, but fit the bill for those looking for respite from the weather.

For most people, it would be hard to imagine living in something only a few feet wide; The space is confined and absent of decor and ample comforts. For those without homes, however, it could get you off the street.

After experiencing the stress of not having a decent place to live, Pickering says he believes every person deserves the dignity of something they can call their own. "Even if it's only this, it's theirs".

He says he knows this idea isn't for everyone who's homeless, but for people trying to get back on their feet like he once was, he believes it can help.

"If people can find jobs of course they will move on, they will get a house back and their cars, but until then, this will help them."

In addition to creating awareness about the homeless, Gary plans to donate four of his shelters to an organization in Utah County which helps the homeless.