Where to watch fireworks across the state for Pioneer Day

SALT LAKE CITY — Utah is gearing up for its annual celebration of Pioneer Day, and with that comes a lengthy list of festivities and fireworks across the state. While fireworks show restrictions are still in place, that won’t stop communities from celebrating.

Here is a list of Pioneer Day firework shows across the state:

Tremonton: Dubbed the “Best in Box Elder County,” Tremonton will be hosting its fireworks show during its Pioneer Day festivities, but on July 27 instead of July 24. The fireworks show will start at 10 p.m. after a concert by “The Fender Benders.” at Liberty Park, located at 200 N. Tremont Street, in Tremonton.

Bountiful: Fireworks will go off a day early in Bountiful as part of Handcart Days. They will take place July 23 at about 9:45 p.m. at Mueller Park Jr. High.

Cottonwood Heights: Butlerville Days at Butler Park, 7500 S. 2700 East, will end with a fireworks show at 9:45 p.m. Tickets for events and activities vary.

Salt Lake City: Liberty Park will host a fireworks show beginning at 10 p.m. They will take place after the park’s Native American Celebration. 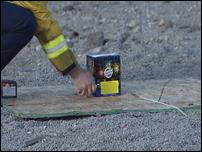 Because of changes in firework laws, Utahns now have bigger and more dangerous fireworks available this holiday weekend -- and that has many firefighters worried.

West Jordan: A fireworks show will follow the Youth Pioneer Pageant, a performance by Nathan Osmond and skydivers. The show begins at 8:30 p.m. at the West Jordan Arena. Tickets to the event are $8-$15.

Heber: “Fiddlers and Fireworks” is a more unique fireworks display. Watchers get on board a train for a two-hour trip along the shores of Utah Lake. The train leaves at 8:15 p.m. and stops at the shore to watch the Charleston fireworks across the lake. Tickets are $38 for adults and $24 for children.

Charleston: A fireworks show will begin at dusk as part of the city's Pioneer Day celebrations. They will be set off at 3300 S. 3600 West in Charleston.

Orem: There will be fireworks after the Orem Owlz baseball game that begins at 7:05 p.m. at the Brent Brown Ballpark. The Orem Owlz will be playing the Ogden Raptors and tickets range from $4-$10.

Mapleton: The city has a full lineup of Pioneer activities, beginning with a fun run at 6 a.m. and culminating with "Fireworks in the Park" at 10 p.m. Their website touts a show that will rival the Stadium of Fire.

Spanish Fork: “Fireworks Spectacular” will begin at approximately 10:30 p.m. at the Sports Park in Spanish Fork. The fireworks show will follow the Fiesta Day rodeo, and a variety of family-friendly activities will take place before the show.

If you know of any fireworks shows we missed, contact us at kslweb@ksl.com

Fairview: The 29th Annual Demolition Derby will be followed by a fireworks show at the rodeo grounds in Fairview. The derby starts at 7 p.m.

Washington City: The city will be hosting a day of activities at Veterans Park, including breakfast, a parade, games and then fireworks at dusk. The fireworks show will be held at the Community Center Park.

If you know of any fireworks shows we missed, contact us at kslweb@ksl.com.