There will be swag

What's a convention without free stuff?

The Salt Lake Comic Con hasn't announced its final sponsorship package, but Comic Cons traditionally have decent swag, including action figures and posters in addition to the usual pens and keychains you'll find at any convention.

The Salt Lake Comic Con swag bags are included in the price of the ticket.

You can meet famous people

This year's convention features actors and actresses from shows ranging from "Star Trek" to "Grimm":

Brandon Mull, author of the Fablehaven series, will also be at the convention.

People will be dressed in crazy costumes

Comic Con is known for bringing in fans dressed as their favorite sci-fi or fantasy character. Dressing up isn't for everyone, but if you're looking for an opportunity to show off your Captain Kirk or Incredible Hulk costume, here's your chance. 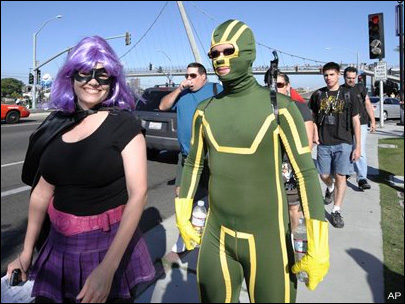 Comic-Con International: San Diego is the largest Comic Con in the United States. The four-day event is held every summer in San Diego. The day before it begins, there is a preview for exhibitors, professionals and some guests.

The convention originally centered around comic books and sci-fi or fantasy television and movies, but has expanded to include a variety of pop culture elements, including anime, collectible card games and video games. More than 100,000 people attend every year, and the convention has a regional economic impact of $162.8 billion, on average.

The Salt Lake Comic Con will be on a smaller scale and will see fewer grand announcements and big celebrity names, but will follow the same format and give a taste of Comic Con to those who have never attended the event.

Kids get in free

Whether you buy a one-day, three-day or VIP pass, you can take your kids 10 and under to Comic Con for free.

Are you going to Salt Lake Comic Con? Have you ever attended one elsewhere? Let us know on the comment boards.