WEST VALLEY CITY — The man who police say brought a gun into the West Valley City Police Department lobby and was shot after pointing it at officers was charged Tuesday.

James Ramsey Kammeyer Jr., 39, who on April 29 walked into the front lobby of the police department at 3575 S. Market St. (2790 West), was charged in 3rd District Court with threat of terrorism, three counts of aggravated assault, and possession of a firearm by a restricted person. All charges are third-degree felonies.

After entering the lobby, West Valley police officer S. Arnold agreed to walk out from behind the protective enclosure and speak to Kammeyer in the general public area of the lobby, according to charging documents. Arnold had partially opened the door and was about to step out into the lobby when he noticed that Kammeyer "appeared to be fidgeting with something in his pockets," charges state.

When Arnold asked Kammeyer to remove his hands from pockets, Kammeyer pointed a gun directly at him, according to court records. Arnold closed the door and yelled, "Gun!"

As Arnold radioed for help, Kammeyer pointed the gun at civilian worker Michelle Vaughn, according to court records.

Sgt. Jeff Conger ran down the stairway from the upper floors of the department to assist. When he opened the door that lead into the lobby, Kammeyer "turned toward him and pointed the gun at (Conger's) head," charging documents state. 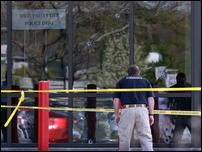 West Valley police have confirmed that a man was shot inside the police department Monday morning. Four months ago, he told police he wanted a "suicide by cop."

Conger fired several rounds, striking Kammeyer twice in the arm. Court records indicate the West Valley sergeant was the only person who fired during the incident.

No one else was injured. The lobby remained closed for 24 hours. Kammeyer was treated at a local hospital and later booked into the Salt Lake County Jail.

The night before the incident, West Jordan police responded to a domestic dispute between Kammeyer and his wife. He was charged May 1 with criminal mischief and two counts of domestic violence in the presence of a child.

In December 2012, West Valley officers were also called to deal with Kammeyer. He had cut his wrists and "told officers at that time that he wanted to die suicide by cop," said West Valley Police Sgt. Jason Hauer. The man said he was a registered sex offender and his wife was taking his children away from him.

Court records show Kammeyer pleaded guilty to sex abuse of a child, a second-degree felony, in 1999. He was scheduled to go off the sex-offender registry in January if he didn't break any other laws.