Box office predictions: To everything there is a season

SALT LAKE CITY — This past weekend, a tragic blow was dealt to the public. Criticism was levied against last week's prediction article for insensitivity. It should be noted that the article was already written, edited and put in a publishing queue before the tragedy began to unfold.

There are myriad discussions that are being held throughout the country. Should gun control laws be tightened? Should a new assault weapon ban be passed? Is the Tea Party at fault?

Others choose to turn the efforts of their confusion to the suspect of the massacre in Colorado. Who is James Holmes?

Some turn to the director and actors. Discussions rage about the decision made by Warner Brothers not to release box office figures over the weekend. Are the Batman films too violent? Does the violence and sexuality portrayed by Hollywood on the silver screen influence the behaviors of individuals? 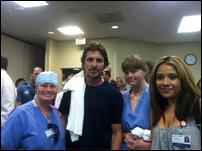 Christian Bale may just play a superhero on film, but on Tuesday he was a real hero to a few people.

This article wishes to pay tribute to those who were victims as well as the survivors. Nothing is more precious than human life. The friends, neighbors and relatives of all who were involved in the Aurora shootings are likewise in the collective thoughts and prayers of society.

Kudos could be taken based on the fact that all of the predictions made last week were accurate, and great joy could be taken in analyzing the new films. In the spirit of failing to be deterred by acts of terrorism, an abridged version of the article will still be presented.

Instead of diverting a majority of the reader's attention to the relatively insignificant discussion of box office predictions, however, it is the goal of this author to redirect that effort this week. It is hoped that the reader can take the time and energy that would otherwise be expended on analyzing the upcoming box office weekend and refocus that toward positive efforts.

This columnist chooses to use the canvas this weekly column provides to offer a ray of hope, pay respect, honor the heroes and provide inspiration to everyone. In that light, take time to reach out to those you know. Value what you have at the present, knowing that life is fragile and for some there sadly may be no tomorrows. Prioritize life and goals.

Lastly, please do one favor as a homework assignment and report the results in the comments for this article. Find at least one person after reading this article and say or do something to brighten their day. The only force powerful enough to overcome evil is the positive service and actions of normal everyday people.

Two new films come out this week in wide release. The first, "Step Up Revolution," is a PG-13 musical drama. The second is "The Watch," an R-rated comedy starring Ben Stiller and Vince Vaughn.

The predictions for the weekend of July 27 are:

Joseph Irvine is an engineer in Madison, Ala., who attended the midnight showing of "The Dark Knight Rises." He extends his condolences to all involved and hopes his readers take his challenge to heart to give an act of service after reading.