PARK CITY — Cross country skiing may seem like a normal task for most people, but for one man it is a miraculous feat.

Jarem Frye is missing most of his left leg. When he was 14, Frye was diagnosed with bone cancer. The next year, doctors amputated his leg above the knee.

That meant the active, athletic teenager wouldn't be able to snowboard, wakeboard, and cross-country ski standing up.

At the time, prosthetics for above-knee amputees, AKs as they're called, were made for walking and running. Bending and supporting weight and the force of impact was out of the question. But even at 15, Frye was thinking he could change that.

"I just had the feeling that if other companies weren't developing the prosthetics that would make it possible for me to do what I wanted to do, that I would do that myself at some point," he said.

One day while skiing (with one ski) with a disabled ski team, he saw a telemark skier and told his coaches that was something he wanted to try.

"They looked at me like, ‘that's crazy, there's no way an amputee could telemark ski,'" he said. 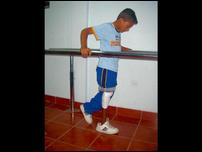 A group of BYU students who decided to spend part of their free time in college finding an inexpensive way to build prosthetic limbs is now traveling to developing countries helping people walk again.

Frye started analyzing the mechanics of his situation, and eventually, he built a prototype of an artificial knee out of old bike parts. Soon, he was telemarking.

Frye had no formal training in engineering, but he said that he was always a do-it-yourself kind of kid.

"…I have a background in Legos," he joked.

His best Christmas present ever, he said, was two tons of coal. The coal went with a forge his dad bought him. He spent that winter blacksmithing in his backyard. He crafted swords for a school production of Romeo and Juliet.

Wanting to improve his metalworking knowledge and skill and his knee design, Frye took jobs in machine shops. The prototype eventually evolved into the XT-9 and a startup now called K-12 Prosthetics. Frye farms the parts out to local manufacturers and assembles them in the basement of his Saratoga Springs home.

His first sale in 2005 was to a man in France. The happy customer sent Frye a video of himself snowboarding.

"It brought me to tears," Frye said. "I just literally started crying."

Now customers are using the knee to snowboard, climb, surf, windsurf, waterski, snowmobile and motocross, among other things.

"When I would fall it was basically like a tree falling," Roundy said.

Now Roundy, who lost a leg above the knee to cancer when she was eight, is trying to make it to the Paralympics. She says the sport was recently added to the games, in part, because of the XT-9.

I would not go back and change my past. I wouldn't take the chance at how I might turn out otherwise, how my life might be.

"Even though I survived cancer," she said, "I didn't really have anything that kept me going. If it wasn't for snowboarding, I don't think I would have the passion for life that I do."

Frye says people may not believe him, but, if somehow he could get his leg back, he wouldn't.

"I would not go back and change my past," he said. "I wouldn't take the chance at how I might turn out otherwise, how my life might be."

He said he lost a leg but found so many wonderful opportunities and experiences. Last summer, Frye joined the first all-amputee team to climb El Capitan in Yosemite National Park. It took them five days and four nights.

Even though he's been on cross-country skis three times, he's considering a run for the Paralympic nordic ski team. A few years ago, he demoed the XT-9 for the Paralympic team and received positive encouragement from a coach. Now he wants to go to Sochi, Russia in 2014.

Frye says that one of the most invaluable opportunities has been being able to change people's lives.

"(That) is something that is just immensely rewarding that you can't buy with two legs," he said.