Ron Yengich is the attorney now assigned to handle his case. Johnson didn't say anything about the switch of attorneys after a stern warning from a Federal Magistrate to stop talking to the media. A formal hearing on a gag order is scheduled for the future.

Outside the court, a small number of supporters were gathered holding signs that said "Free Johnson," "Freedom of speech," and "No more government corruption."

Possible charges against Johnson will be revealed sometime next week, despite Johnson declaring his innocence throughout the ordeal. In his last interview before his gag order took effect, he told media that he thinks Swallow is innocent as well.

During his federal case, Johnson has remained strangely calm about the uncertainty of his situation. He said it's a situation he tried to avoid several years ago by contacting Utah Senators Orrin Hatch and Robert Bennett, but there was no response.

"I just got the feeling that it was like, 'I'm busy running the country,' or whatever senators do," Johnson said. 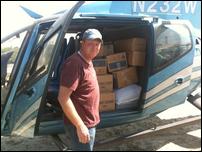 His shaggy red hair sticking out in all directions after a night's sleep, Jeremy Johnson tossed a wad of cash on the end of his inflatable mattress in a large tent on the Dominican Republic-Haiti border.

Johnson said his friend Swallow, who was then-deputy Attorney General, got involved. Johnson said he gave Swallow a total of $250,000 in an effort to stop an FTC investigation. Swallow said the money was to pay for a lobbying effort on Johnson's behalf.

"I just sort of chalked it up to a 'politics as usual' kind of conversation," Johnson said.

Johnson said he doesn't think Swallow did anything wrong. He said that he has no hard feelings about Swallow, the man he still considers a good friend, who is responding to the case by calling Johnson a liar.

He insists that he and Swallow are victims of "overzealous Federal prosecutors" and the media.