Though it may feel like Utah has been slammed by storm after storm this month, the state is nowhere near its normal snowpack for the year. Experts say it's going to take a lot more snow to get us there, something that's both frustrating and unbelievable to many.

"I don't care for it right now," said Salt Lake City resident Kerry Adams. "It's just a lot of work."

It's a hazard for drivers and pedestrians alike.

The resorts get their one foot, but typically they'd be getting the two- to three-foot kind of storms that have kind of eluded them this year.

"I'm used to walking on ice and snow so I do pretty well, but I think a lot of people are having a hard time getting around on foot," said Adams.

Even with all the trudging through snowbanks, inching down steep streets in your car and shoveling for hours on end, there still hasn't been enough snow to go around yet — at least when it comes to the mountains.

"We were slipping down into the mid-75 percent of average range, in the low 80s," said Randy Julander, NRCS Snow Survey supervisor.

This year, the valleys and benches are getting hammered, but the mountains — not so much.

"If we get 120 percent of average from here on out in terms of snow accumulation, we'll be close to average conditions come April 1," said Julander. 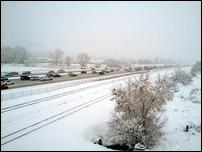 Another day, another snowy commute in northern Utah.

It seems unbelievable, but it's true. And the reasoning is a bit complicated.

"Part of that has to do with the orientation of the storms, the way these storms are coming in," said KSL meteorlogist Kevin Eubank.

A typical Utah winter storm moves west to east. But the recent storms that have pummeled the valley have been sweeping down from the Northwest and flowing almost parallel to the mountains.

Lake effect has played a major role as well.

"The resorts get their one foot, but typically they'd be getting the two- to three-foot kind of storms that have kind of eluded them this year," said Eubank.

The people responsible for removing the snow aren't complaining.

"It's good when it snows," said Kory Teuscher with T and T Contracting Solutions. "It's extra money."

For most, though, it's a bitter pill to swallow.

"So we're going to be below normal?" said Adams. "That's hard to believe."

If the next couple of days play out as expected, experts say Utah should get to above 90 percent normal snowpack for the year.