Another storm to pelt Utah with 2-5 inches of snow

5PM: Another storm to pelt Utah with 2-5 inches of snow

SALT LAKE CITY (AP) — A winter storm that pummeled northern Utah with up to a foot of snow and contributed to 200 traffic accidents that left nine people injured, isn't over.

Sunday's blizzard pounded the Wasatch Front from Ogden 70 miles south to Provo with 9 to 12 inches of snow on valley floors. Alta ski area reported 14 inches in the mountains east of Salt Lake City.

It caused some delays Sunday at the Salt Lake International Airport as plows labored to keep runways cleared. 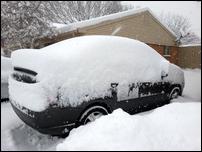 The storm arriving Monday night will also visit central Utah and drop another foot or two of snow in the Wasatch mountains, said Monica Traphagan, a meteorologist at the National Weather Service in Salt Lake City.

The storm blasts are keeping northern Utah's air pollution at bay, she said.

For more than a week until Sunday, the greater Salt Lake region logged the nation's dirtiest air with up to 130 micrograms of fine soot per cubic meter, more than three times the clean-air limit set by the U.S. Environmental Protection Agency.

On Monday, Salt Lake County was down to less than 8 micrograms of soot per cubic meter.

Stagnant weather conditions could set the stage for a return of bad air by the weekend, Traphagan said.