4 things you should know about Utah gun laws

SALT LAKE CITY — In the weeks since the Sandy Hook massacre, where 20 children were killed at a Connecticut elementary school, the rhetoric around the nation has been about safety and gun control, including laws that allow Americans to carry a firearm.

However, the types of "arms" allowed — assault weapons — has been debated ad nauseum in recent weeks.

More recently, a man was photographed at a Utah JCPenney store Wednesday openly carrying an semi-automatic rifle over his shoulder. While not illegal in the state of Utah, many shoppers were concerned about the situation, whether legal or not.

Whether the decision to openly carry a rifle into a store is recommended or not, many do not know the laws in Utah about carry a firearm. The following are four things you should know about carrying a firearm in the state of Utah.

Utah is an open-carry state

Supporters of President Barack Obama's gun-control proposals are planning a methodical, state-by-state campaign to try to persuade key lawmakers that it's in their political interest to back his sweeping effort to crack down on firearms and ammunition sales and expand criminal background checks.

Utah allows for citizens of the state to openly carry an unloaded firearm without a concealed firearm permit. To be classified as "unloaded," the firearm must not have a round in the "firing position" and the firearm must have at least two "mechanical actions" from firing. The firearm cannot be concealed, but must be clearly visible at all times.

Although openly carrying is not illegal, residents of the state are encouraged to be wise about their actions. In Jan. 2011, a 51-year-old man was handcuffed and detained for a few minutes after walking on the sidewalk near Orem's University Mall with a semi-automatic rifle over his shoulder and carrying a handgun. The man was cited with disorderly conduct.

Rep. Paul Ray, R-Clearfield, is hoping to change the law so that carrying a holstered gun or toting a rifle would not be grounds for disorderly conduct or other criminal charges.

Utahns who choose to carry a firearm are prohibited from being in a secure area of an airport, secure areas in which firearms are prohibited and in any courthouse, churches if posted, mental health facility or correctional facility. However, concealed weapon permit holders are permitted to carry at any public school.

A firearm "capable of being concealed" can be in one's home or place of business without a permit. However, a citizen wanting to conceal a firearm on his person must have a concealed weapon permit, which is valid throughout the state for five years.

Individuals not permitted to hold a concealed weapon permit include those convicted of a felony, crime of violence, an offence involving the use of alcohol, involved in the unlawful use of narcotics or other controlled substance, offense involving domestic violence or has been deemed mentally incompetent by a state or federal court.

With or without a concealed weapon permit, individuals cannot carry a firearm if under the influence of alcohol or a controlled substance. 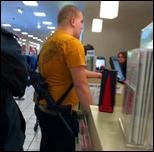 The gun debate continues to rage, and one man has gained a lot of attention. A picture of him wearing a rifle inside the Riverdale JC Penney has gone viral.

Carrying in a vehicle

Utah law allows for citizens to carry a loaded weapon in a vehicle if they are at least 18 years old and have lawful possession or consent of the person who has lawful possession of the vehicle. However, the weapon cannot be a rifle, shotgun or a muzzle-loading rifle.

Individuals with a concealed weapon permit are free to carry a firearm into a bus terminal and may board a bus or train.