Rep. Chaffetz calls for discussion on mental illness and guns

Chaffetz calls for discussion on mental illness and guns

WASHINGTON D.C. — A Utah congressman is calling for further discussion of the mentally ill and their access to guns.

Rep. Jason Chaffetz, R-Utah, said on ABC's "This Week" Sunday, "We have to deal with the mental health aspect."

"I think it's absolutely fair game," Chaffetz said. "I think we absolutely should talk about the intersection of a lethal weapon and how it relates to mental health."

While some of the roundtable discussion focused on legislation, Chaffetz did not mention plans for specific legislation. He later clarified his remarks in an interview with the Washington Post, saying any effort to evaluate or monitor the mental health of perspective gun owners is a matter "best meant not the federal government but for families, churches and schools."

He re-emphasized his opposition to wider gun control legislation, something he was clear on during his ABC appearance. 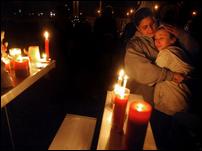 Democrats say meaningful action in the wake of the school shootings in Connecticut must include a ban on military-style assault weapons and a look at how the nation deals with individuals suffering from serious mental illness.

"I'm a concealed carry permit holder. I own a Glock 23. I've got a shotgun. I'm not the person you need to worry about," Chaffetz said. "And there are millions of Americans who deal with this properly."

Chaffetz disputed the notion of a need for the so-called "assault weapons ban" to be re-instituted. Rep. Donna Edwards, D-Maryland, said on "This Week" she would support that kind of measure and she'd like to see that background checks are required when individuals sell guns.

Chaffetz and Edwards did seem to find common ground on the issue of violent video games and movies and a "culture of violence."

Chaffetz said that issue needs to be addressed as well, but it wasn't just a government solution - families, churches and communities need to be involved.