NORTH SALT LAKE — Speaking at a press conference in Connecticut on Saturday, the father of one of the little girls killed in Friday's mass shooting expressed their love for their daughter.

Robbie Parker shared a statement from the family, describing the loss that he and his wife were feeling and the love they felt for their daughter. He said Emilie was the kind of person who lights up a room, and added that he felt blessed to be her father.

"As the deep pain begins to settle into our hearts we find comfort reflecting on the incredible person that Emilie was and how many lives she was able to touch in her short time here on earth," he said. "Emilie was bright, creative and very loving. Emilie was always willing to try new things, other than food. She loved to use her talents to touch the lives of everyone that she came into contact with."

The family said that had Emilie known the gunman was having life problems, she would have made a card for him.

"I can't count the number of times Emilie noticed someone feeling sad or frustrated and would rush to find a piece of paper to draw them a picture or to write them an encouraging note," Parker said.

In an act of forgiveness, Parker extended his prayers to the family. 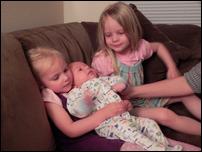 As a nation mourns the loss of life in Connecticut the very personal nature of such a public tragedy came clearer into focus.

"It is a horrific tragedy and we want everybody to know that our hearts and our prayers go out to them. This includes the family of the shooter," he said.

Emilie, the oldest daughter of Shultz and Prothero's lifelong friends and former Ogden residents Robbie and Alyssa Parker, was killed the day before when a gunman entered an elementary school in Newtown, Conn. and opened fire.

With the family far away in Connecticut, the two friends wanted to help out in any way they could and began organizing a memorial fund in Emilie's name through America First Credit Union to assist the family with expenses. In no time at all, friends, family and community members had rallied around the family, donating to the fund and posting heartfelt messages of sympathy online.

"You can’t go give them a big hug, you can’t be there for them. We talked to them on the phone but that only helps so much," Brad Shultz said. "Their family is here in Utah, they’re all going to need to come back to Utah and hold services that they weren’t planning on financially."

As the deep pain begins to settle into our hearts we find comfort reflecting on the incredible person that Emilie was and how many lives she was able to touch in her short time here on earth.

Shultz and Prothero said they are grateful for and humbled by the overwhelming support they have received from the community. Within hours, the memorial fund was bogged down with donations, prompting America First to restructure the account to handle a larger transactional volume.

"The Parkers are such a wonderful family, they're loved by so many people" Prothero said. "I think this does give an outlet for people here who are just heartbroken to do something, to reach out and do something. I think people are acting on that desire to help out in some small way and we’ve seen a tremendous response."

Friday's tragedy is being described as the second-deadliest school shooting in U.S History. In all, 20 children, ages 6 and 7, as well as six adults were killed before the gunman took his own life. The suspect's mother was also found dead in her home.

Prothero said Robbie and Alyssa Parker have been married for 10 years and are two of the greatest parents he knows. The couple had moved to Connecticut not quite one year ago and had a total of three children, all girls.

"That's probably what hurts the most," he said. "They're just the sweetest little girls."

The tragedy is the second to hit the family in just a few months. Alyssa Parker's father, Douglas Cottle, died in October after a bicycle crash.

"They're being strong," Shultz said when asked how his friends are holding up. "I think they're trying to control the pain they're feeling, because they have to, but they're being as strong as they can."

Individuals interested in donating to the Emilie Parker Memorial Fund* can do so at any America First Credit Union branch. The Emilie Parker Fund Facebook page also has information on submitting online donations.