SPANISH FORK — A Utah woman who recently died from Gastroparesis is raising national awareness about the disease and inspiring people across the country. Haley Stonehocker of Mapleton died in her sleep on Thursday night. Her family and friends say she was the first one to help comfort anyone in need and she left this world wanting to help educate more people about her illness.

With a green ribbon on their chests, members of the G-Pact online community (Gastroparesis Patient Association for Cures and Treatments) gathered at Haley Stonehocker's funeral - standing together to honor one of their own. They call themselves "GP Sisters."

The women, who are in their early 20s, traveled from Boise, Reno, Denver, Syracuse, and the Salt Lake City are for the young woman they met just a couple of years ago. Cortney DeHoyos traveled from Denver, Colo. to honor Stonehocker and says she inspired her to help educate others about the illness.

"I had to drop out of college because I'm so sick all the time," said Cortney DeHoyos. "I'm constantly in and out of hospitals."

DeHoyos said having the illness can be discouraging for young people who suffer with symptoms daily.

"Sometimes people find our illness so unique and rare so it can't be real," said DeHoyos. "So we must be making it up."

"It (Gastroparesis) basically took me from being a mom to being in bed 24-7,"said Chelsea Rushton of Syracuse. "And having my parents raise my kids."

For Rushton the emotions of losing her friend are still raw. Just weeks ago, she visited Stonehocker in the hospital.

"We would text all night," said Rushton. "My husband would tell me ‘get off the phone and go to bed.' And I just couldn't."

Gastroparesis is a condition that affects all ages and races. The disease inhibits the stomach muscles' ability to function properly, which can interfere with digestion. It causes nausea and vomiting, and affects the body's ability to receive proper nutrition. Stonehocker became bedridden and was tied to a feeding tube in the hospital. Patients describe the illness as having the constant feeling of morning sickness or having the flu every day.

"It's very difficult just driving on the road. Many of us are nauseous just sitting in bed," said Maddie Cullen of Boise. 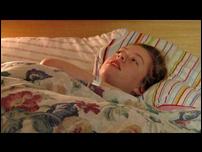 Cullen is studying at the University of Utah and hopes to become pediatric gastroenterologist. She said Stonehocker inspired her to want to help kids suffering with Gastroparesis.

"We've already lost a few (people) this month to GP,"said Cullen. "It's a lot harder than older people who have passed away or lived more of their life. She (Haley) never got the chance."

Some say having the disease is especially heartbreaking for younger people because they say their peers just don't understand what they're going through. Some say they've lost friends because of the disease.

"You don't know if you're going to wake up and feel nauseous," said Stephanie Hyatt of Denver, Colo. "And go somewhere and have to go vomit in the bathroom and cancel on friends."

Hyatt said belonging to the online community with Stonehocker was a tremendous strength to her.

"She'd always say that I'm such a beautiful person inside and out," said Hyatt. "How I could make it through everything."

Colleen Beener sits on the board of G-Pact. She says it's not clear how many people nationwide suffer from Gastroparesis mainly because the illness is often misdiagnosed as an eating disorder.

"There are very few good doctors who understand this disease," said Beener.

We've already lost a few (people) this month to GP. It's a lot harder than older people who have passed away or lived more of their life. She (Haley) never got the chance.

Beener said most people with Gastroparesis travel hundreds of miles and go to other extremes to seek diagnosis and treatment.

"There's just not a lot of understanding of this disease. There's not a lot of research going on about this disease. There aren't any good medications in this country for the disease," said Beener. "Most of us that find something that works we get it out of the country and it's not FDA approved but we do it anyway because it's the only way we can get through the day."

Dr. Troy Madsen, University of Utah, confirmed that Gastroparesis is difficult to diagnose.

"There isn't a blood test that can simply diagnose it," he said.

Madsen said the tests to diagnose the illness are invasive and can result in inconclusive diagnoses. Still, he recommends patients seek a gastrointestinal specialist to better diagnose the disease.

Tuesday, the group released green balloons at the track and field grounds of Maple Mountain High School where Haley Stonehocker was a track star. Alli Baker shared that interest with Stonehocker, who inspired her to run track and field even while suffering from her Gastroparesis symptoms.

"I always carried that never ever give up mentality that Haley always taught me," said Baker. "Mine's not as severe as hers so I was running for her and those people who couldn't do it when they wanted to."

The GP sisters took one final lap around the track for their friend Haley. It's a gesture of hope - for more education, better diagnoses and treatment so that those living with Gastroparesis will have a better quality of life.