The two back-and-forth Allegiant Air flights to Mesa, Ariz., are a humble beginning, but city leaders hope the operation blossoms into something bigger.

"If you don't build it, they won't look at you," airport manager Royal Eccles said Monday.

Fortunately, the airport has made improvements on its terminal and on its runway and it is eyeing a bigger slice of the commercial air market in Utah.

"This building here only just enables us the ability to attract other airlines and other services," Eccles said.

Though Allegiant is committing just a flight per day roundtrip on Thursdays and Sundays, Eccles said he has numbers that show the airport can support 22 flights every week. Eccles said Allegiant Air — which, along with Allegiant Travel, specializes in vacation packages — generally flies to vacation destinations like Las Vegas, Los Angeles, Hawaii and Florida.

While Ogden isn't viewed as one of those end destinations by the airline, Eccles said he believes it can become that as a winter sports destination, with ski slopes and former Olympic venues easily within reach.

The early flights, Eccles said, have sold well and feature roughly the same amount of people coming to Utah and going to Arizona. 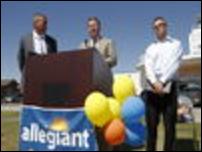 It's a small start with big promise for Ogden- area tourism as the city hammers out a deal to bring commercial jet service back to the Ogden- Hinckley Airport.

"Ski season, I think, it'll probably work out alright," said James Gordon, who was taking in some coffee and the view in the airport's diner. "I think they have a fairly decent base to pull from."

Dale Altman, a resident of Layton who has a home in the Phoenix area, stopped by the airport Monday to survey the setup. He's taking the first flight out on Thursday.

"Never really honestly thought about it until we saw it on the internet, that it was an option," Altman said. "It could possibly work for us, so we'll give it a try. It's exciting."

Eccles dismissed the idea Ogden's airport could eventually fall victim to the same fate as Provo's, which just learned Frontier airlines was backing out following only about 14 months of service.

"We have a different airline, Allegiant, who owns their own airplanes and flies to destinations and has their own travel company," Eccles said. "We have a little bit different situation than what they have."

The inaugural Mesa-to-Ogden flight arrives in Ogden from Mesa at 8:40 a.m. Thursday. The first flight from Ogden-Hinckley to Mesa takes off at 12:40 p.m.