Death leaves hole that 'can never be repaired,' family of slain child says

Death leaves hole that 'can never be repaired,' family of slain child says

WEST JORDAN — Calling her a "bright star" who will be "deeply missed," the family of a 6-year-old girl who police believe was murdered released a statement Monday.

"As expected, our family is devastated and we are grieving heavily about the loss of Sierra and the circumstances surrounding her death," the family said in the statement signed by Sierra's father, Brad Newbold. p>

"The hole left in our lives by her absence can never be repaired. We are most grateful and deeply moved by the public outpouring of support during this tragic time."

Newbold said the family was "cooperating fully" with police and pleaded with anyone who has information to contact officers at 801-256-2211.

Monday's statement, they said, would be the only comments the family has for now. 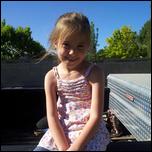 Six-year-old Sierra Newbold was remembered Saturday by friends and family as a sweet and spunky little girl who loved to draw with pink crayons and flash her big brown eyes at the people she loved.

"The time is not right for us, and we are not prepared at this time to talk about Sierra’s death in public. This is an extremely private matter for our family, and we wish to continue our grieving in private," Newbold wrote.

Sierra's body was found in a canal near her home on June 25. Her mother had called police just before 7:30 a.m. to report she was missing from her home at 2383 W. 7095 South. Officers started searching the area and found her dead a short time later.

West Jordan police say Sierra was sexually assaulted and are calling the case a homicide, but have remained tight lipped about their investigation. No one had been arrested as of Monday.

Funeral services for Sierra were held over the weekend.