SALT LAKE CITY — Both trust and the growing budget deficit are two key issues for a pair of Republican candidates vying to be the next mayor of Salt Lake County. The race will be one of the marquee primary election matchups when voters go to the polls June 26.

County mayor is arguably one of the most important mayoral position in the state. With a million people living in the county, Salt Lake is the state's most populous. County government has a $810 million dollar budget, which has been under considerable pressure since the recession hit. But that issue has been overshadowed by the headlines generated by a controversy involving one candidate, West Valley City's Mayor Mike Winder.

Last November, Winder admitted to Deseret News editors that he used a false name to get stories published in the Deseret News and ksl.com by using a freelance contributor network.

At a debate last week, he said he did it because he was frustrated by negative or non-existent news coverage of his city. 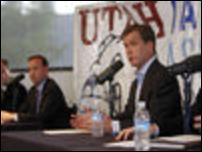 The snippiness started with a campaign mailer and turned downright testy last week when the two Republican candidates for Salt Lake County mayor got together for a debate.

"I realized I loved my community enough and I'm frustrated enough that I'm going to take matters into my own hands," Winder said. "In hindsight, was it a dumb, boneheaded thing to do? Yeah. But there's a grand American tradition of pen names."

His opponent, Mark Crockett, said trust is an issue in the campaign. "I really think we have more important things to talk about, but I think you're also brushing over what you actually did do."

Crockett, a management consultant, has mostly self-funded his campaign. A former county councilman, he told KSL the county has spent and borrowed too much.

Winder, who has a background in public relations and marketing, has said that as mayor he's led a resurgence of the state's 2nd largest city, with new development and a new TRAX line, while making tough decisions.

"The truth is I have been a fiscal conservative," Winder told KSL. "I have held the line on spending. We've reduced our budget in West Valley City 14 percent. I've opposed tax increases and voted against them."