Soldier returns from fourth tour in Afghanistan on Memorial Day

Soldier returns from fourth tour in Afghanistan on Memorial Day

SALT LAKE CITY — It was a truly special Memorial Day for the family of one Utah soldier. He returned home to them today from his fourth tour in Afghanistan.

Only a handful of people were at the airport to welcome him home this time. But Major Robert Perry realizes that countless others have been there along the way.

"You know it takes kind of a tribe to support a service member and I think everybody acknowledges that and it's just great to be back," Perry said.

This is the fourth time that Perry's family has sent him overseas. For them, saying goodbye is nothing new.

"I'm used to it. I still have a card from his second deployment," said his son, Robert Perry, III.

But it doesn't matter how many times he leaves - the important thing is that now he's home.

"I realize that I'm still here acknowledging that there's guys out there in harm's way right now defending our freedom. So I appreciate that," Perry said. 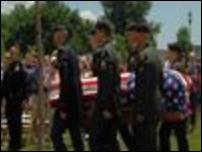 Families of soldiers remember patriotism, service of the fallen

People across the nation are honoring those who gave their lives defending our country.

They aren't wasting time now that Perry is home. They're all anxious to check things off their to-do lists. One of Perry's" Eating a "big, fat steak."

Major Perry said the biggest shocker coming home was seeing how big his little girl was. Before he left, she wasn't walking or talking and now she's a toddler.