The closer one comes to their source, a house on Lambert Lane, more come into view. A handful of neighbors fill the balloons, tie them to strings at least 160 feet long and place them in their cars for distribution.

"They're just a reminder that there is a building that is proposed," said organizer R. Paul Evans. "(We're) trying to get a dialogue with the people who make decisions, to meet their needs as well as the flavor of this neighborhood."

The Pleasant View neighborhood sits in the heart of many things that make Provo what it is and Evans calls it a "gem" of the city. The LDS temple is to the east. BYU's Lavell Edwards Stadium and Marriott Center sit to the south and west, respectively. The "Y" mountain looms near. 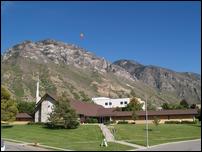 A group of residents living near the LDS Missionary Training Center are planning a type of protest this weekend to demonstrate just how tall a planned nine- story building MTC addition will be &#8212; they'll be using balloons.

And the Missionary Training Center — an epicenter of The Church of Jesus Christ of Latter-day Saints' worldwide missionary effort — borders many of the neighborhood's homes. It has housed and trained more than one million LDS missionaries since the mid-1970s and, in 2014, it will feature a new, nine-story, 160-foot tall building.

City and church officials say the dialogue sought by opponents to the new MTC building is ongoing.

"After more than three years of evaluation and numerous neighborhood discussions, the church has chosen to add a new state-of-the-art language training facility to the Provo Missionary Training Center," LDS Church spokesman Scott Trotter said in a statement. "This building plan meets all current development codes and zoning requirements."

The LDS Church has created a "Neighbors" website about the project in an effort to address the concerns of those in the neighborhood. It explains why the building is needed — five existing buildings need replacing for myriad reasons from undersized classrooms to old heating, cooling and plumbing systems. It also addresses the reasons behind the decision to make one large building as opposed to the other options they considered. Renovations, replacements of the individual buildings or two, smaller buildings, for example, lead to excessive costs, limited future growth, would not meet current needs and would expand the MTC

As is, the building will be 400 feet away from the closest yard and the permit process is set to begin this month or next, according to the website.

Community meetings have also been held about the proposal. But some members of the neighborhood say the meetings have been fruitless and prompted Saturday's actions.

"We met as a neighborhood with the president of the MTC and realized that they were just going to go ahead with this, so we decided we were going to do what we could do to preserve the neighborhood," neighborhood resident Charlotte England said.

We... realized that they were just going to go ahead with this, so we decided we were going to do what we could do to preserve the neighborhood.

She likens the building to a "monolith" and a "mammoth" and said she worries it will change the feel of her neighborhood or open the door to other large buildings. But she hopes to make it clear that it's simply and wholly about the building and nothing else.

"The main thing we're trying to do is educate people about what's really happening," she said. "Some people think if you oppose the building, then you oppose the church and the leadership, but it's not that at all. We don't oppose the expansion … we just don't want it that tall."

This is reiterated by Evans, who said he sometimes feels a "terrible angst" about whether opposition to the building will be misinterpreted and that it's an angst he hoped to avoid.

"This is not a LDS Church issue," he said. "It's a building issue and should be treated as such."

Evans is the chairman of the neighborhood, but he said this issue expands beyond his own backyard to the whole city. That's why he has launched a citywide petition, hopes to meet with Provo Mayor John Curtis and officials at BYU and decided to spearhead the efforts.

"I talked to people all over the city and said, 'Is this something we should take a stand on? Is it worthy of our best effort?' and the overwhelming response was, 'Absolutely,'" Evans said.

The balloons are reusable and Evans said they will be used in the coming months. They are also hoping to advance their petition online.

But Tom Schumann, the neighborhood's vice chairman, said he is in full support of the proposed building. He thinks it's the best solution for both the present and the future.

If I'm going to look up and see a tall building, there's nothing I'd rather see than the Missionary Training Center. If I see that, it's a good thing.

"To me, it makes sense if they can just tear down the buildings and continue operations without having to curtail the MTC too much," he said. "The other thing is, looking at the area on the Google maps, there's not much room for expansion. … It might allow for future growth."

Resident John Potter said he'd rather the MTC expand its campus upward than outward. Even then, he's not that worried about it.

"It doesn't bother me at all that they're building a new building there," Potter said. "The way I look at it, we got lots of tall trees, the MTC tends to be a good quiet neighbor (and) we've never had any problems with them. I don't think it will affect my life."

Schumann thinks it will actually add to the neighborhood. He said that he loves being able to stand on his front porch and see the temple spire, hear the roar of the football crowds and listen to the BYU bell tower chime "Come, Come Ye Saints." The MTC is also part of that landscape.

As lawn mowers growled in the background, Norma Darais and Anne Snow stood on the sidewalk Saturday, away from the action, talking. Weeds and gardening tools in hand, Darais said: "I think it's a mistake. … What concerns my neighbors, concerns me."

"I think they need it, but they've got other alternatives," Snow added, also noting that it's not about the MTC or its purpose, just the building. "We have strong testimonies. We support the MTC. All of our children and grandchildren served missions."

For Clark Moulton, a neighborhood resident of more than four decades who has served three LDS missions, that missionary effort trumps all.

"I think the orange balloons, like all balloons, are full of hot air," he said. "There's nothing more exciting than the work of the Lord. They could build it in my front yard."