SALT LAKE CITY — A question about the age of a man accused of killing a 7-year-old girl could keep him from being eligible for the death penalty.

Esar Met is accused of killing Hser Ner Moo more than four years ago at an apartment complex in Salt Lake City. Attorneys for Esar Met have said they don't know his age and so he can't be eligible for the death penalty. They filed a motion this week in the 3rd District Court asking a judge to take the possibility off the table before his preliminary hearing in June.

Court documents state that Esar Met is a Burmese national citizen and that he was raised in a refugee camp in Thailand before coming to the U.S. It states that neither Mr. Met nor any of his family know the date or year of his birth.

The motion also states there is no existing paperwork, and there likely never was any paperwork, documenting his Met's birth in Burma.

Gerald Brown, the director of the Refugee Services Office for Utah's Workforce Services, said it's not uncommon for refugees, especially from Burma, not to know their age. 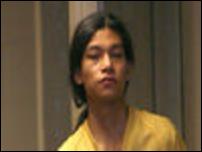 Attorneys on both sides of the case of Esar Met &mdash; a refugee from Myanmar charged with kidnapping and murdering a 7-year-old girl &mdash; walked into court Wednesday thinking they, and Met, were on board with a plan to move forward.

"Here, it's a big deal and so we think it must be a big deal for everybody, but it's not the case," Brown said. "People sometimes know which year, but sometimes they don't know that. They might know they were born in a dry or rainy season, it's just different priorities."

In court documents, Met is listed as 25, making him 21 at the time 7-year-old Hser Ner Moo was kidnapped and murdered. But he could have been younger than that and not yet an adult.

Hser Ner Moo's body was discovered in Met's apartment a day after she went missing. District Attorney Sim Gill said his office will review the case and respond as needed.