MURRAY — The family of a woman who was shot and killed Monday now say she was trapped in an abusive relationship.

Relatives said 25-year-old Shantelle Reid never really talked about her relationship with Ryan Robinson. But her brother knew enough to believe she was abused. He says she wanted to leave but it was too late.

"She was a good person and I'm going to miss her forever," said Jay Reid, her brother.

Photos on Reid's Facebook page show a happy couple. But friends and family say Reid kept concerning details about her relationship with 31-year old Ryan Robinson to herself.

"She's very giving and loving. I wasn't aware she was trapped. I didn't know, so she hid it well," said Doris Dickerson, a family friend.

Reid also denied abuse when police went to Robinson's Murray home Monday afternoon on calls of a domestic dispute. Less than two hours later, officers went back again and encountered Robinson with a gun. Police chased him through the neighborhood and shot him once in the stomach. They found Reid's body in the home. She had been shot to death.

"It was just a shock," Jay Reid said. "It just didn't seem real at first." 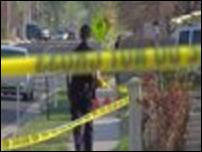 A man is in stable condition after being shot by police Monday while fleeing from the scene of a crime.

Jay said Shantelle wanted to leave her boyfriend but felt trapped by his threats.

"He threatened us to her, that he would kill her family pretty much," he said.

Jay also said that he had hit her in the past, even going so far as to hit her with a gun. He said that eventually Robinson would not let him talk to Shantelle.

She was most concerned about the safety of her 3-year old son, Aaden.

"She has a beautiful son and he took his mommy away," Dickerson said. "She leaves a big hole in our hearts."

Friends and family say Reid was always thinking about others. She was going to donate a kidney to her brother.

"She wanted me to live, so it's like he kind of took two lives, in a way," Jay said.

They hope Robinson will realize what he took from them and they lamented how little they knew about the situation and their inability to change it.

"I didn't know she was so trapped," Dickerson said. "She wasn't alone. I think I understand she felt she was alone, but she was not alone. She had family that loved her."